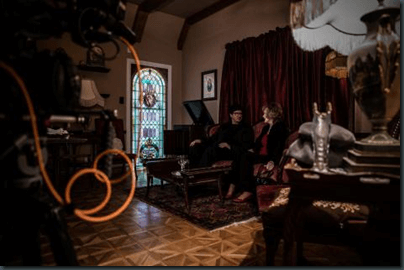 For this investigation, Zak goes no further than his own recently purchased museum, the one we saw featured in his series, Deadly Possessions. The original 33 room mansion was built in 1938 by the Wengert family. At the time, it would have been the largest home in the area and a prominent landmark. It’s now on the historical register, but went through a couple of hands before coming to Zak.

During the renovation, several workers decided they’d had enough of the paranormal shenanigans and walked off the job. Feeling their might be some strange energy associated with the house, he performs an overnight lockdown investigation to see what he and the team can discover.

To get some background, he brings in Rachel Vosko, who used to sneak into the house through the basement in the 70s. She claims there was a pentagram drawn on the floor, enclosed in a circle with streaks of blood around it. Zak invites her to go into the basement where she feels something is clinging to her legs. While recording this segment, Billy claims he gets the words, "I need help" in the voice of a little boy. It is supposed this could be James Wengert who died when he was 8 years old.

Another visitor to the house is Erika Monasco, who says she felt negative energy. She also says her husband indicated her personality changed during her time at the house. As she began to feel somewhat uncomfortable with the house, she poured salt around the room she used as an office.

And then as if on cue, Erika has a bit of a breakdown. She says an icy force swept over her, then has an attack of shortness of breath and a crying spell. Moments later, the feeling passes and she is fine again. However, she later sends Zak a text message that contains the picture of her hand with a large scratch across it.

Finally, they have Shirley Shupe, one of the Wengert children, over for a visit. Her family moved into the house when she was 5. She has no reports of anything odd or unusual, but does convey that her mother died in the house. There is nothing dubious or sinister surrounding her death, she simply died at home. And in a wee bit of scrying, Zak has Shirley sit in front of a mirror and talk about her mother. She gives a rather nice talk to the point she thanks Zak for taking over the house.

Zak then gives Shirley a short tour of the place showcasing what he plans to do with the place. Oddly, Shirley’s old room now houses the Kevorkian VW Bus. I’m sure she wasn’t expecting to see that in there.

As they start the investigation, a cuckoo clock that has been silent this entire time, begins to tick. As Zak shows the movement and how it takes force to get it to start and stop, they claim to hear a child’s laughter. As they look around using the SLS camera, a figure appears and leads them to the room of the VW Bus, wherein the SLS crashes and shuts off. But not before they see the making of a head peering out of from the corner of the frame.

Since they are next to the stairs leading to the basement, they claim to hear the sound of hissing. With the recorder running, they feel the words, "Zak Bagans" comes through.

They then use the SB7 Spirit Box in other parts of the house, but don’t pick up anything until they move into the doll room. They get the word, "play" when asking what the doll wants to do, as well as the word "England" when Zak asks where the doll wants to go. Things get a little strange when Zak asks the doll what’s possessing it and gets the response, "Drop it." They also pick up a growl and a doll from the Villisca Axe Murder House, says the word "Villisca".

There is more strange doll behavior as Zak takes one of the dolls to the basement and surrounds it with rem pods. When Billy goes to check on the doll, it says, "hello there" and the pods start going off. Things get a little unruly as Aaron says he’s having some negative feelings to the point where he wants to punch or stab Billy in the throat. Whether it was Aaron’s statement or the basement itself, but Billy needs to take a break and head outside.

We’re then given a couple additional details such as Aaron got the word "witches" when he was down in the basement and when Zak asks what do the spirits see in the basement, they get the word "secret". Aaron ties these two things together about witches and their secrets.

Finally, they set up cots and sleep in different parts of the house. Zak feels something touch him during the night while the camera watching over Jay seems to move three different times before finally getting unplugged and shutting down. Further, his bed has seemingly moved a couple inches in the night and bunched up the carpet around the feet of the cot.

While the blood soaked pentagram in the basement makes for a great story, let’s not get carried away. During that time period people were putting pentagrams on just about everything including album covers. And not everything that has 5 points is a demonic symbol despite the conclusion people like Zak jump to. And I’m sure any bit of red paint or red wax will look like blood to a teenager breaking into the basement of a massive house. To me, that is using an old cliche to say the place is haunted. Just think what Zak would have done if he’d been told they’d found a Ouija board in the basement?

And the bit at the end with the camera moving? Pretty nifty to be sure, but I don’t think paranormal machinations are the only explanation for that.

The house is certainly interesting, but really, do we expect Zak and his crew to say the place isn’t haunted? I mean, how would that look?