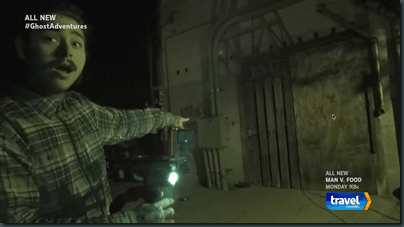 Halloween may be over, but Zak heads to Tucson, Arizona to investigate where he feels a  dark energy is feeding on the blood of the living. This is confirmed by performers who claim to have been scratched, received bruises and had blood drawn from puncture wounds. The dark entity feed on the animal sacrifice, but now it needs human blood.

The haunted attraction is the Farmer John Meat Packing Plant, that operated from 1962 to 2004. And by Zak’s explanation, every meat processing plant in the country is haunted and a portal for evil because of all the blood that has been spilled. I doubt he has the same notions when eating a steak or having a hamburger.

While doing interviews, Zak gets a blip on the spirit box and feels a form of energy is holding him in place. Zak interprets this EVP as "woman in trouble" because the people affected are women. Other evidence includes a photo of a performer where a dark mass appears out of nowhere. This can also be interpreted as someone put their finger over the flash. When Dakota has a stomach pain, they feel it’s demonically inspired.

The investigation includes a guest, Post Malone, and they are all jumpy as cats. Post  jumps at every shadow and noise, including the raccoon or cat they capture moving around. Not to be outdone, Aaron throws in his comment of feeling sick, and when they turn their hacked up SLS toward him, there’s a stick figure on his back.

Going to the location of the captured black mass, they leave Post on his own to see what happens. In a panic attack he begins to sweat and pull at his neck. As they bring out the Talking EVP and point it at Post, they get the words, Dirty, Afraid and Really.

In another burst of words it offers up Cattle and Cow. It also offers plenty of other words and numbers that aren’t mentioned.

Since Post Malone has heightened senses, meaning he’s scared out of his mind, Zak sends him off alone with a chest mounted camera. In this state of panic he feels something is walking next to him. We then Aaron getting sick to confirm Post’s experience.

Amidst this, Post hears someone gasp. Zak immediately comments how cold it is. However, neither the gasp nor the cold spot are recorded. They also claim there is a growl and it’s coming toward them. When it gets close, they run like hell in the other direction.

Finally, Zak goes into a trance and acts spaced out as though possessed. Zak asks the entity touching him to say his name. He gets a response of "Zak" and "gotcha" on the spirit box.

For the big finale, as they bump into a Halloween prop and scare themselves, Zak asks the prop for it’s name. Zak believes he gets, "Satan" as a response.

Zak got out of this investigation, exactly what he put into it. He goes above and beyond to illustrate just how dangerous this location is. Yet, it’s a business trading in the thrill of fear. And obviously not dangerous enough to close down and turn away a profit.

It’s also hard to put any stock in their claims when they don’t have any actual evidence. Getting scratches and bruises from wandering around in the dark next to exposed machinery and jutting bolts in the wall, aren’t signs of Satanic forces. Further, this is the second Halloween attraction Zak claims is haunted by Satan. So which one is he at?

One Response to Ghost Adventures – The Slaughter House – S15E17