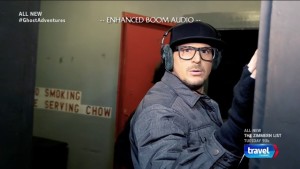 Our next paranormal stop is in Globe, Arizona at the Old Gila Country Jail. Zak and team have been brought in by a call from Ozzy, a reporter that had a negative experience at the jail. She claims to have been attacked by an unseen force.

As they take Ozzy back into the jail, they hear the normal bangs and noises of an old building. But when they turn on the spirit box, they feel they hear Ozzy, even though they admit to only hearing the end, the Zy, portion of a word.

But they get large spikes on the EMF detector, going from a baseline of zero to 150. When they talk with Tom, the local historian, he says there are sad feelings and heaviness when walking in the jail. He is also aware of the EMF spikes, which have been detected by others, but no one has tried to find a cause.

They then hear from Debe, who gives the story of Kingsley Olds, who claims he was visited the by the spirit of the two girls he murdered. The “story” claims they asked him to come with them (to the other side). The next day he was shot in his cell. A headshot delivered from the courthouse as revenge for the murder. No one was caught for the shooting, but the father was suspected.

Zak then goes on a massive nearly incoherent rant, which makes him seem under the influence of something, about how the girls came to visit Kingsley to taunt him over his upcoming death and that they coerced their father to kill Kingsley out of revenge for their murder.

As they start the investigation, we are treated to yet another panic attack from Aaron, because he’s back in a room where he claims something jabbed him in the neck. Zak then tricks Aaron, and in usual cowardice style, locks him in a cell, so that there’s conflict like there would have been in the prison.

Zak and Billy leave Aaron in the dark while they investigate the courthouse. Using a parabolic microphone, Zak claims to hear a man in mortal agony. The noise we here is nothing like that, yet Zak insists it’s someone screaming for their very life. When it’s not recorded or heard by anyone else, Zak says it’s was only meant for him to hear in his own ears.

He also spots another light anomaly falling down the wall, which then turns into a mist and disappears.

Meanwhile, Aaron is basically losing his mind. He gets the word “Jim” on the Ovilus, then lights. Then through paranormal happenstance, the street lights turn off, or so he says. Rather than the lights being on a timer, or merely a power spike, or that being a daily occurrence, Aaron feels this is Jim communicating. Of course, we have no record of a Jim.

Aaron also gets more erratic behavior from the MelMeter, which spikes to 44 milligauss and gives a temperature reading of over 500 degrees. Most people would say that’s an unreliable piece of equipment. But to Zak, this is solid evidence of activity.

For the final part of the investigation, they set up the assassination experiment, which has Zak with an empty air rifle in the courthouse, and Jay lying in the bed of Kingsley. Zak takes three shots and gets the words, “head”, “rapture”, and “pappy” on the Talking EVP. Jay says he can hears girls speaking as Zak is firing. While this isn’t solid evidence, it’s at least interesting and Zak doesn’t have to make his usual wild leaps to weave it into a story.

By and large, they capture very little evidence. It would be hard to imagine an old jail without bangs and knocks. They try very hard to make the couple of audio blips form into Ozzy, and you can run with it if you like. About the only thing interesting is final portion with Zak and the air rifle.