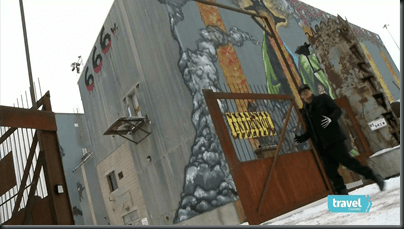 The team heads to Salt Lake City, Utah to investigate an abandoned cement factory that’s been turned into a permanent Halloween attraction where staff members say they’ve had experiences with dark energies, seen shadows, and have even been pushed off ladders. There is even talk that occult activity has charged the negative energy and made this a breeding ground for dark forces. When the cement factory was abandoned it fell into the hands of the homeless community. They turned it into their own village until it was sold to the current owner and made a funhouse. Not much is known about it’s time as a homeless town, but it’s safe to say it wasn’t the happiest of times.

Right off the bat I’m incredibly suspicious of this investigation, this location and everything associated with episode. A money making Halloween attraction going on television with claims of paranormal activity and demonic entities? Talk about a boost in sales and publicity. This entire thing screams marketing campaign and based on some of the claims, it reads like the plot of a subpar B-Movie.

Putting that aside, let’s see what this modern day house of horrors has to offer. The interviews reveal that some employees believe they’ve seen shadows moving across the "Swamp Silo". Another employee says she was pushed off a ladder. Another claims to have had something follow him home sending him into a mood and funk his wife was just about to give up on. But the big story is Chris, a performer in "Hell’s Silo" who plays Satan and reads verses from a Satanic book he found. Which book is he reading from? Who knows, as the cover page is blurred out. It could be the Satanic Bible by Anton Lavey, but that is merely a guess. Zak believes it’s far too dangerous to show the cover to his impressionable audience or to speak it’s name. Goodness knows what we do with such information.

Chris also claims that he has talked with members of the staff that are Satanists themselves and they’ve admitted to performing rituals in "Hell’s Silo". Well isn’t that special. Gee, someone from a Halloween attraction saying they’re a Satanist who performed rituals to scare the crap out of the new kid. Let’s just keep piling on the high school scare tactics.

Moving on to the investigation, things starts off with a bang. Or rather the sound of something being scratched over wood. Billy captures some audio of what sounds like something raking over rough wood or plaster. It’s an odd scratching sound, but I don’t really feel that’s the sound of the demonic. Obviously Zak disagrees.

When Zak goes to investigate, the power to the building mysteriously goes off and all the emergency lights come on. Nick believes he hears a moan and there is some sort of sound captured on audio. Add to this, back in Hell’s Silo there is a series of loud bang and Zak feels these are all connected and the signs of an entity "charging up".

They make the best of the investigation with Zak heading to the area where the woman was shoved off the ladder. With his recording running, Zak feels he captures a voice saying, "it’s coming" right before power is restored to the building.

With this investigation really going nowhere, Zak decides to investigate on his own. Using his Spirit Box he picks up a female voice he claims is taking responsibility for the power outage. Of course it takes a long time to get a response and Zak seems to be waving his hands around as though waiting for the response.

To put the big icing on the cake, they invite Chris, The Prince of Darkness in Hell’s Silo to read from his Satanic book while they film it. Clearly they don’t condone or encourage him doing this, but since it makes for good television they’re all on board him doing it for them.

So off goes Chris into the depths of hell to read from a book that’s so scary the audio has to be bleeped out. And while down there, Zak jumps around wildly at some orb moving on the screen and feels he hears a dark voice speaking and demonic laughter. Chris says he’s feeling weak and Aaron says he’s feeling dizzy. Of course what do you expect to happen when you read such dangerous words? If nothing happened you might get the wrong impression about the bugaboo known as Satanism.

It’s amazing to me how reading the "Satanic" bible or rituals immediately conjures the devil and dark happenings, but continually reading the Bible doesn’t seem to do anything. You can conjure the devil on command, but God seems to be a lot harder to reach. Sorry, that’s just insulting and stupid.

This episode is bunk and it all feels like a commercial for the Fear Factory. Don’t get me wrong, the place seems cool as hell and if I had the extra cash I would head out there his Halloween and check it out. It looks like wicked good fun. But all the talk surrounding it sounds like complete rubbish. You don’t just conjure the devil because you read some passages from a book. Pretending to be the character Satan doesn’t make you the devil. If it does, Mark Sheppard who plays the devil on Supernatural is in some deep shit!  So are a lot of other actors out there.

The "accounts" of the paranormal are things I heard in high school about kids who played D&D. The evidence they capture is so weak as to be discounted immediately. If this is the breeding ground for dark energy and the devil is so easy to get find, why didn’t he make an appearance?