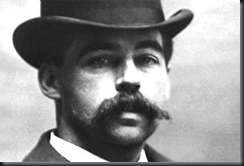 A new series from the History Channel just popped onto my radar and one episode in particular grabbed my attention. The name "Murder Castle" should strike a chord with plenty of people. While this isn’t the first episode in the series, I felt compelled to jump ahead and see what new information they had to offer. Holmes is a uniquely fascinating, bizarre and terrifying creation. As you read of his ill deeds and lengths he would go it seems like the whole thing is made up. This is stuff or horror movies. Sadly, it’s real. Perhaps through time embellishments have been made, but there is no doubt that Holmes specifically built the Murder Castle within walking distance of the World’s Fair so he could find victims, perform experiments, carve up their bodies, sell the skeletons, steal money and property and then incinerate the bodies.

This episode expands on "H.H. Holmes – America’s First Serial Killer" which is where I first learned of these events. Since the original feature was made in 2004 a couple of new events have come to light, specifically we have Jeff Mudgett, the Great, Great, Grandson of H.H. Holmes who offers more insight into Holmes and goes so far as to say that Holmes is more than likely Jack the Ripper. Much of this can be found in his book, "Bloodstains", which I have read and find fascinating. But there is a slight problem. Much of what Jeff writes is hard to discern as fact versus hypothesis. You get the sense he’s revealing the truth, but in reality it may just be his opinion. So what does Murder Castle have to offer?

Jeff Mudgett and author Adam Selzer offer their understand of Holmes and the events he perpetuated on Chicago. Holmes started off his career as a doctor and made a fortune digging up bodies and selling the skeletons to medical schools. He would make hundreds of thousands of dollars in this endeavor. But money wasn’t enough. He enjoyed the kill and took that vast wealth to build the Murder Castle in Chicago. It is indeed a real place and when police investigator found it, it really did have hidden rooms, body chutes, an incinerator, acid baths, gas tubes for asphyxiating guests, peep holes so he could watch his guests, rooms that locked from the outside and holes in the floor that dropped people to their death. It was designed from the ground up as a way for Holmes to trap victims, kill them and make money off their death. And while the Castle was destroyed, a Post Office has been built on the site and the basement is largely intact.

New to this episode is the idea that Holmes is Jack the Ripper. Holmes bought the land for the Murder Castle in the summer of 1888, but construction didn’t begin until Spring of 1889. And during this time Holmes is unaccounted for in Chicago. There is evidence to suggest he took a boat abroad. There is also evidence of an American doctor selling skeletons to the University of London Medical School. As we all know, this was his old tried and true method of making money.

Mudgett puts forth the theory that based on the murders, medical training would be needed. Holmes had this training and would be quite adept at performing these procedures in the conditions of London. Holmes had the training, the temperament and perhaps even the timing to be Jack the Ripper. And since the Ripper was never caught, does this coincide with Holmes whisking back to Chicago before being caught?

We also get some more evidence about the Pietzel and some of his other victims. Could there be links to those victims and some paranormal activity that new homeowners are experiencing? Are the Holmes victims trying to be heard? Some Post Office workers speak about their experiences down in the basement of the building.

While most of the information has been presented in different books and documentaries, it’s interesting to see and hear it all in one place. Mudgett offers his interpretation of the events and Selzer offers his insight based on research and investigation.

Did Holmes fake his death? Did he commit the murders under the guise of suicide and what became known as the Holmes Curse? Were there far more victims that we realize? And most of all, can Holmes be linked to the events of Jack the Ripper?

This new documentary is available on Amazon as an Instant Video purchase. I only wish it were longer, there is simply too much story to tell in the 44 minutes that are allotted.