Dr. H. H. Holmes and The Whitechapel Ripper – A Review 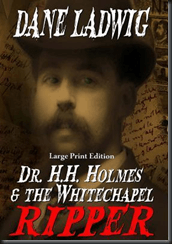 You would think by the title , Dr. H. H. Holmes and The Whitechapel Ripper, that such a book would contain all sorts of links, theories and hypothesis between the history we know of Holmes and the crimes we know of Jack the Ripper. It’s a fascinating and intriguing theory that’s bubbled to the surface in a couple of places, not the least of which was presented by the great-great-grandson of Holmes himself, Jeff Mudgett. Bloodstains gave an interesting perspective on Holmes being in London, committing the murders in order to sell skeletons and harvest organs. But that was hypothesis and speculation with a smattering of what-if. So does this new account from Dane Ladwig fill in the gaps and present us with compelling evidence to support the conjecture that H.H. Holmes committed the Whitechapel murders and that’s why Jack the Ripper was never caught?

To put it bluntly, no. For anyone familiar with the crimes of Holmes this book is repetitious and extremely jumpy. Pieces of crimes Holmes committed, the money he was paid for his "confession" and details about the Murder Castle are repeated several times. For anyone who’s seen "H.H. Holmes: America’s First Serial Killer" there is nothing new to be learned here. In fact, the chaotic writing style may even confuse and downplay the devious nature of Holmes.

The crimes of Holmes make up the first 70% of the book and then we jump into the a recap of the Ripper murders. The book goes over each of the murders in case we didn’t know what happened. It then goes on to dismiss or refute why different suspects should be discounted as the true identity of the Ripper. There’s even reasons why we should discount the "Jill the Ripper" idea.

Somewhere in all this are a couple dozen words that try to link Holmes to the Ripper murders. However, if you blink you’ll miss it. Despite the bait and hook of the title, there is no real evidence or argument to create a case that Holmes is Jack the Ripper. Yes, it’s a great idea and to me, it sounds just as plausible as any of the other theories, maybe even more so, but this book does not offer anything tangible or meaningful to add to the discussion. To be honest, this book is nothing more than a Primer on some of the crimes committed. And even at that, it’s far too long to be a summary, yet lacks detail to make it compelling.

With each chapter you keep waiting to see the link between these men. Yet it never comes. When you finally get to the portion of the Ripper murders it feels like you’re going to run out of time and pages to make the connections. And then you hit the credits and bibliography. Sadly, I was left wondering what the point of the book was. Bloodstains presented a fictionalized connection that makes you wonder if Mudgett’s evidence is real or imagined. The Whitechapel Ripper simply sums up the crimes of these two killers and let’s you decide if there is a link.

I was disappointed, confused and frustrated when I reached the end. There was nothing to be learned and I don’t believe this offers any real research to link these two sets of crimes. This is not a good book about Holmes, nor is a good book about Jack the Ripper. If you’ve never heard of these two criminals, this might be worth some of your time. In my opinion though, there are far better books on the subject. You’re better off with the above mentioned "H.H. Holmes: America’s First Serial Killer" or "Depraved".