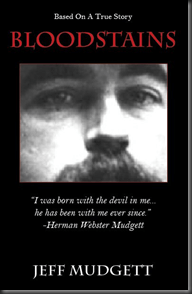 Jeff Mudgett takes us on a journey of discovery as he opens a seemingly innocent box of fishing lures left to him by his deceased grandfather. That box contains two journals that date all the way back to the late 1800s. In fact, they belong to the infamous H.H. Holmes, the alias for Herman Webster Mudgett, Jeff’s great-great-grandfather.

But why two journals? He was hanged while barely in his 30s.

That’s the question Jeff investigates as he reads through what appear to be the real journals of H.H. Holmes. And there are two of them because it is believed that Holmes was actually able to escape the gallows and continued to live on until the 1950s, perhaps the 60s.

At times this book is startling and shocking and I found myself reading as quickly as possible and turning pages so I could take in all the much information. Jeff provides a lot of insight into Holmes and makes multiple links between Holmes and other events in history. It gives way to amazing theories.

Was Holmes indeed Jack the Ripper? Was he actually out of Chicago during that time period? Did Holmes actually train an assistant to cut up the bodies and make such a spectacle so as to cover his true intentions of being in London?

Did Holmes escape the gallows? Was the public confession and the demand for cash part of his plot to escape? Did he use the power of suggestion to morph his appearance in the public eye so that he could actually switch places with one of the guards? And the cash was so he could start his life over once he was out and free?

Is the former site of the Murder Castle haunted? Jeff visited the site and had some powerful experiences. Did he run into the spirits of the victims, perhaps even Holmes himself?

Was the post office built on the former site of the Murder Castle because Holmes was actually able to convince the President at the time it was a good idea? Was he actually covering his tracks by burying the infamous basement and it’s acid baths, lime pits and crematoriums?Is this further evidence he actually escaped the gallows?

Does the Holmes grave, encased in concrete and buried 10 feet deep contain the body of a prison guard? Was the concrete actually to hide the evidence on his crime and his switch rather than a way to keep people from digging up and dissecting his own body?

Is Holmes buried in an unmarked grave Jeff’s grandfather knew about?

Is there some link between Holmes and the Zodiac killer?

Jeff explores all of these and it’s a truly fascinating read. I was riveted. However, like many other have said, it’s hard to tell what is actually information from the Holmes journal, what is conjecture on Jeff’s part, and what is simply fiction. Are his Ripper theories really based on Holmes teaching someone else to commit the crimes and make them so heinous they distract from his real purpose in London? Or is it just an interesting way to get people to read his book?

As I read along, I bought into everything Jeff had to say. I trusted his authorship based on the fact he had these two journals. The book starts off with him having them authenticated and conclusions that they were written by the same person. But by the time we get toward the end of the book things change. Jeff is having seizures, visions, voices in his head, hallucinations, lost time and dreams where he is being coerced to commit murder. He’s becoming violent, aggressive, dismissive of people and their feelings. Is this the work of Holmes, gripping him from beyond the grave?

In the final chapter, things come unraveled. It’s hard to tell what’s real and what’s imagined. What starts off as a book rooted in fact ends with wild stories of unmarked graves along the railroad tracks, during a rain storm under the light of a full moon.

And then the hammer falls. Jeff has had multiple grand mal seizures, brain damage and has actually been brought back from the dead. He’s been studied and the doctors say nothing he experienced was real.

Does that mean all of this was a dream? Were the last 300+ pages simply a wild goose chase? Is there evidence to support his theories? Everything seemed so logical, so based on fact, it all seemed to make sense. Then we are hit with the idea that none of this could be real. All of it has been part of brain damage he suffered from the seizures.

I’m intrigued, but frustrated. It’s a great book to read, but I feel somewhat duped. Does Jeff Mudgett really have these journals? How much of the book is real? Will we ever get to see these journals so we can judge for ourselves? Did he take some liberties to spice up the story?

Here we have what I think is a golden opportunity to provide facts never available before and sweep away the myths surrounding Holmes and the actual crimes he committed. Unfortunately, I think Jeff has muddied the waters even more. While his book is fascinating and well worth the read, it’s hard to separate the fact from the fiction. We don’t have clear lines to tell us what is straight from the journal and what is conjecture or theory. Just that little addition would make me feel so much happier about what I read. But, perhaps there is still more to this story.

If anything, this makes me want to dig deeper…

One Response to Bloodstains – The Analysis