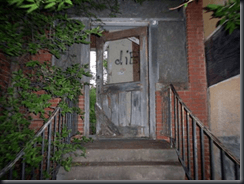 For this episode of Ghost Asylum, we head off to Oklahoma City to visit the St. Vincent Mental Asylum – another location I have never heard of. It’s tragic that so many of these asylums have the same checkered past. This one started in the 1940’s as a treatment center for the mentally ill. Things went quite poorly and the story goes that a nurse smothered two patients. It was then taken over by a priest named Frank Dolan who turned it into a drug rehab center. Thing again went quite poorly and Father Dolan was killed on the property by the patients he was trying to help. The facility only lasted until the 1980’s when it was shut down. The property is now in private hands, but it stands abandoned. TWC spoke to the owner and he says it was an investment, although he’s not sure what to do with the place. Perhaps it’ll be renovated, perhaps just turned to rubble.

But many people have come to investigate this location and they talk of shadow figures in different parts of the asylum. They hear creaking and the banging of doors. They also claim to see floating orbs out in the woods. We have to take some of this with a grain of salt. The woods are a stones throw away from a neighborhood with plenty of street lights and traffic. Additionally, this is an old, broken down building with plenty of rats moving around so your going to hear footsteps and hear creaking. This nearly collapsed building will make all sorts of weird sounds.

As the team moves through the building the focus on Father Dolan and whether or not the entities with them had something to do with his death. The meters flash and spike so they feel they’re in the presence of evil. We also get confirmation of the rats in the building.

Armed with some evidence they seek out locals to learn more. Turns out then nurse that smothered the patients was most likely schizophrenic and sadly Father Dolan had his own personal demons and was supposedly arrested for soliciting male prostitutes.

During the investigations they feel they capture several shadow figures moving through the halls. Although this certainly seems like the work of the big rats or perhaps their own bodies casting shadows, they disagree.

Since they firmly believe the asylum is in the grip of a demonic entity, one that has driven the patients and staff to madness, they want to trap it and throw it out of there. The trap of the night has me scratching my head though. I understand the theory of burning sage for good energy and sulfur is supposedly left behind when evil is afoot. However, I don’t understand how they plan to use a wet-dry vac to suck up something from the spirit world. They seem to coat the inside with reflective sheets in hope of confusing the spirit? Can someone explain this one to me? I’m no engineer or scientist, but the validity of this one escapes me. Are they just picking a hardware store at random and basing their trap on what’s available in these small towns? Are we really expecting spirit energy to be trapped by what’s on the shelves of the local janitorial supply store? Good gravy!

Anyway, they burn sage which doesn’t seem to gain any reaction. They then turn to the sulfur which they believe causes more shadow figures. As they chase the spirit around and call it out, the bucket of sulfur mysteriously burns into a roaring fire which "could have burned the building down". A touch exaggeration, but ok, it did flare up. What else was in there? Like an fire, did it just reach a previously unused fuel source? Are demonic shadow figures the only answer?

The meters once again start to go off and they all feel their seeing things crawling the walls and coming to get them. This of course comes with headaches out of nowhere. The team wonders if this is the evil entity trying to get into their heads.

The sage and sulfur don’t draw in the spirits as they had hope so alas the wet-dry vac of demonic holding doesn’t come to fruition. So close though. They feel they have plenty of evidence though and head back to see what they have.

The grainy video evidence shows a blob moving across the wall, which they firmly believe is the shadow figure of the dark energy and they also feel they capture the name "Brannon" one of the investigators on the team being spoken by an unknown voice.

So where does this leave us? Is this place the residence of some dark force that drove the staff and inmates to kill? Are these real shadow figures or just the trick of the light or reflections? Would the trap have worked had the spirit energy moved into the right position?

The verdict is definitely still out on this one, but if nothing else, we have another interesting location. If nothing else we’re seeing some new places. You can check out some really interesting pictures of St. Vincent’s at the link below.