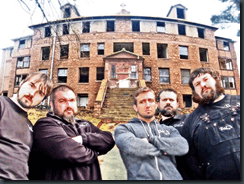 For this outing we head out to Missouri, to visit the Ironton Asylum. It should come as no surprise that this medical facility suffered from the problems of overcrowding, violent patients, lack of funding and the talk of unorthodox medical experiments. However, we don’t have documentation that proves it. What we do have is the word of local residence who throw out the blanket statement that bad things happened there. It’s really hard to dispute those claims, but it should come with some solid evidence.

I will also say that Ghost Asylum needs to ditch the stupid theatrics while telling their story. Come on, this is an old asylum, it really doesn’t need those sorts of gimmicks. It’s a run down, scary building, you don’t need those cut scenes. Let the story and the evidence speak for itself. And you wonder why people mock and laugh at this sort of thing?

The investigation kicks off the daylight sweep with blips on the K2 meter. They also go to talk with some of the local paranormal investigators who claim to have spoken with someone named "Bonnie". One says she was hit in the head by some unseen force. It couldn’t have been something falling from this obvious wreck of a building. Bonnie is supposedly tied to a murder that took place inside the asylum. There is talk patients lashed out at a nurse and killed up to 3 people before being subdued. That sort of thing should be in the records somewhere, but again, no documentation. Not disputing the claims because that sort of thing has happened in places like this, but it would be nice to see it confirmed rather than just being the stuff of legend.

As they move around the building they feel they stumble on the presence of a little girl. This is based on the readings being low to the ground. Ok, I guess we can go with that. This energy follows them around and leads them into a dead end where Doogie feels something grabs him in the face.

In another part of the building, Chris and Chasey use the old flashlight trick to try and communicate. I thought we’d seen the last of this with all the shenanigans of the Ghost Hunters, but I guess this trick is making a comeback. Unscrewing the light and asking spirit energy to touch it doesn’t seem all that valid. You can say it responds on command, I say loose connection.

Another piece of evidence is Porter and Doogie reacting to what they say is a large shadow crossing the room. As they stare into a room, they both lean back as though something is coming at them. Yet again, not caught on camera. When are people going to put a camera mounted in front of them so it follows everything they see. I’m getting tired of all these reactions but nothing that shows what it was. It’s a simple fix and cameras are cheap. Put a damn GoPro on your hat or helmet and let’s see what’s going on!

The trap for the night is the EMF Tetrahedron Trap. As they all keep saying, it’s a pyramid with a Tesla coil that provides energy to all the plates that cover it. The idea is to charge the area and funnel the energy to the containment crystal on the top. It seems like a neat idea and is certainly putting out energy to charge the spirits, if such a thing is possible, but is a crystal really going to contain a spirit? Yes, we know they hold energy and get used in lots of different things from watches to computers, but is this really feasible? In a totally abstract sense it sounds like it could work, but I’m not on board with this idea actually working. Anyway, it was a Tesla coil and that alone makes it pretty cool. Plus it was built in mere minutes.

With trigger objects in hand they head out for the second part and use the flashlights again to try and play with some child spirit they found. They have flashlights and meters on the stairs and the game is to turn the lights on and off while running up and down. It looks amusing, but it’s those flashlights again. I’m always going to find that to be a suspect measure of any sort of activity.

The Pyramid trap is pushing out some energy and they get some bangs and noises, but nothing really seems to materialize. Of course, this building looks like it’s going to fall down so there will be plenty of bumps, bangs, pops and things falling from the ceiling. However, in the end, nothing seems to finds it’s way into the trap. The crystal doesn’t show any signs of energy so alas, no ghost captured this time.

They do get words being spoken on the Ovilus, but none of it seems to make sense. We get one hit related to blade so we jump right to the conclusion this has something to do with the mysterious Bonnie and her being cut with a scalpel. There we go making those leaps again.

So, another interesting location, even if we don’t have the supporting evidence of all the procedures, murders and poor treatment they claim went on. There is no history on what really happened there, nor is there anything solid on why it was closed down. The claims are coming from local residents, but nothing is coming from records or former employees. You have to take these stories with a grain of salt. Hospital care was terrible during this time period, but if you’re going to throw out stories, back them up with something. Overall, I think this place is the stuff of legend. It was a hospital, the building is creepy and people like to tell stories. I don’t think we have a lot more than that.