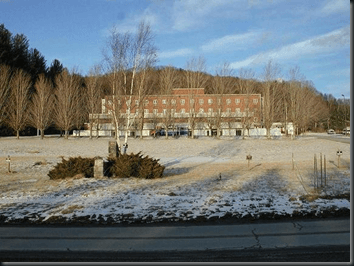 So here we are at the Season Finale of Ghost Asylum and for their send off, they head to Old Cannon Hospital in North Carolina. We have another hospital with some sketchy deeds in it’s past. While most of this will be chalked up to rumor and maybe a little legend there is an incident of a patient holding a doctor and some nurses hostage, the hospital supposedly had a history of housing violent patients and the Chief of Police thinks the place is demonic. People claim to hear screams and whispers and one investigator they spoke with said she felt something on her chest while she was investigating. Like their other locations, there is a lot of rumor and a lot talk from the locals. A hospital like this is certainly where violent patients would end up and it wouldn’t be too hard to image a patient lashing out at the staff. But I have to say, rather unusual for the police to say it’s downright demonic.

The team starts off with the daylight sweep and gets hits on their Mel Meter when asking if the patient was violent. They also discover a lot of medical records and x-rays with patient names. When the place shut down they didn’t take much care about cleaning it up. They also get some responses outside of room 426 and they feel the basement where a door from a refrigerator was stolen is also a hot spot.

For the first night they think they hear a female voice calling to them and they get Mel Meter hits down near the OR. They also believe they see a shadow figure at the end of the hallway blocking out their lasers.

Back up near room 426 they hear bangs and bumps and feel something is thrown at them. The Gauss meter starts to go off when they ask if this energy wants to hurt them. Not sure if that blip means yes or no in this instance. But back down in the basement they get some K2 hits at the stolen refrigerator door.

It certainly seems odd that someone would steal such a large door, but I seriously doubt it was demonic forces. Yes Your Honor, the devil made me take that door! And to say he was a law biding citizen so evil forces are at work is a bit much. There are plenty of examples of evil people blending into society until the mask finally cracks.

After going over the evidence of the night before, the team feels they’re up against a Siren Spirit, one that acts one way to lure men in and then attacks. Bit of a leap based on what we have, but ok, we’ll see where this goes.

Based on the evidence the trap of the night is the Infrasound Infinity Mirror Trap. Basically they will use aluminum plates to direct the signal a cell phone puts out so they can drive the spirits into an infinity mirror where it will get confused and get trapped. Sounds like a neat idea at a funhouse, but is this sort of thing really supposed to capture spirit energy? It has a tinge of legitimacy, but on the whole is dubious at best. But have no fear, the best is yet to come.

As they start using the infrasound and directing it, they hear the sound of a female voice. To them it’s the siren call. The K2 meter and the Gauss meter begin to blip and light up. Soon, it’s a frenzy of noise and lights with lots of yelling for good measure.

And then Brannon snaps. Things have been building up as Brannon kicks in doors and stomps all over the place. In a fit of rage and hysteria he yells at the spirit energy to come out and show themselves and works himself to the point of screaming at the top of his lungs. What some would call acting and an attempt to boost ratings in the hopes of  a second season others would call near demonic possession and being controlled by outside forces.

"He’s never done that!" and "I’ve never seem him like this" they all say as Brannon stares blankly into the darkness. They need to get him out because the dark energy is starting to take over. But there is more to come as Brannon rushes out of the hospital and into the darkness with the rest of the team trying to keep up.

After having his moment alone he then attacks the camera crew saying he doesn’t want the footage of him getting out. The rest of the team dive in, separate him and drag him away.

My goodness, what do we have going on here? Is this really unforeseen evil spirits making their way into one of the investigators? Is this some sort of condition rearing it’s ugly head? Is this a grasp at ratings?

It’s really hard to believe in this one especially since we’ve seen Zak from Ghost Adventures do the same damn thing many times. He gets all belligerent and starts to pick on his own crewmates. Who knows what this is, but I’m not willing to jump on the coattails of demonic possession.

Back at Ghost Asylum HQ, they review the evidence and hear more of the mysterious female voice. They also capture what they feel is a face peeking out from behind a door. And finally there is a voice they interpret as saying, "cut the noise out", in regards to their infrasound experiment.

So there it is, the final and dramatic season finale to Ghost Asylum. What did you think? Are we going to see this come back for a second run?

I will say that even though some of the stories and claims are more the stuff of legend than anything else, they still took us to some very interesting locations, most of which were completely new. They have some good techniques such as the daytime sweep and investigating over multiple days.

Their traps, while confusing, are at least an interesting idea. At least it’s not the parabot of Ghost Adventures fame from a few years ago. I give them A for effort in that regard. Like so many other shows their findings are a bit shaky and their conclusions are a bit of a leap. Not a bad series, but I don’t know if this last episode helped or hurt them.

Next week is a new show called Ghost Stalkers, so we’ll have to tune in and see what that’s all about.