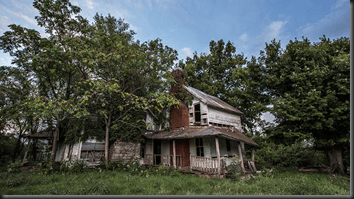 Here we are for the first episode of Ghost Adventures without Nick as part of the action. Nick has decided to step away, perhaps to focus on his new show Ghost Stalkers or perhaps to spent time with wife and family. The reason for the departure seems to have an air of mystery about it so it makes me wonder.

Anyway, the site for this investigation of the Bell Witch Caves which is supposedly the first haunting where a spiritual entity actually killed someone. The story of the Bell Witch has been told many times through such movies as A Haunting and the Blair Witch Project. But the question is, does this story have any truth? Did some sort of spiritual energy actually kill John Bell and does that energy still linger on the property?

If you ask Walter Kirby, current owner of the Bell Witch Cave, he certainly believes the story. But then again, why wouldn’t he? If he said the whole thing was a fake or just rumor, then no would pay to come visit his scary caves now would they?

But financial reasons aside, what sort of evidence do we have here to support an evil spirit haunting the Bell family?

The story goes back to 1817 where a letter describes  "There was no Angel, it was a demon in the house. Folks sat in the room reading the Bible to wait for the witch ghost." Betsy Bell was supposedly the main target of the attack but it was John Bell who actually died. It is believed the witch poisoned John as the family found a bottle of black liquid next to his bed. There was also a claim of a voice saying, "I gave old Jack a big dose of that last night which fixed ’em."

So you may ask, just what was the cause of all this upheaval in the Bell home? Well, that remains a bit of mystery, but there is some thought that Drewry Bell and his friend Corbin Hall dug up a skull from an Indian burial ground and brought it home. It seems to me when you can’t come up with anything else, you go to the standby of the Indian burial ground story. There was no swindling of land, or murder, or suicide, or death from lost love, or gunplay at the hands of a crazy man. It’s the *rumor* of digging up a skull.

To lay the groundwork, Zak and Aaron head to the home of Drewry Bell and hear footsteps walking around. It’s an old house that no one lives in so those clearly couldn’t be anything related to animals or vermin. They break out the spirit box and get the words, "Indian" and "careful" and while these words are spoken, the whole house shakes. They need these pieces to help sell the Indian burial ground angle. We don’t feel or see the house shake or hear some mighty boom and have to take their word for it.

To kick off the investigation, Zak gets a visit from William Porter, a direct descendant of the William Porter that supposedly wrapped the witch in a blanket and tried to burn her in a fire. He agrees to head down into the caves, which supposedly have a connection to the Indian burial ground. William agrees to go in by himself while Jay plays infrasound waves which are very low frequency. William hears rocks falling all around him and Zak believes they capture shadow figures on camera. They even feel they pick up the sound of a pig grunting. It is believed the Bell’s saw twisted and distorted animals which foretold the witch’s arrival.

As Zak and the rest of the team investigate, Billy feels sadness and tremendous pain in his back. They feel a "Chief" is watching them and that their energy is drained. On the FLIR, they pick up energy and strange shapes around Aaron which they feel are related to the Indians. They look like massive blobs to me, but people see what they want to see.

The groups split up with Billy and Jay heading to the gravesite of John Bell while Zak and Aaron head to where some remains where found, brought into the cave and were supposedly stolen. As you might expect, they believe them to be Indian remains. No proof, just a feeling. Jay and Billy get no responses at the gravesite, but Zak feels he sees balls of light and hears the words, "here I come" as he asks for the energy to show itself. Zak is quite fixated on the balls of light these days. They seem to be the answer to everything these days.

It should come as no surprise that Zak feels they have compelling and almost overwhelming evidence to support the story of the Bell Witch. I don’t think that’s what they came away with. They heard rocks in a cave, that’s not paranormal. Their personal feelings of sadness and losing energy don’t mean much to me. You can convince yourself of anything, just look at Ghost Stalkers. They may have captured some voices, but I’m terribly suspect of that sort of thing these days. It’s so easy to capture voices off in the distant or someone talking when they shouldn’t be. And it’s not like you can’t whisper and say, "oh listen, a voice from beyond!" And if this witch is so damn dangerous and blood thirsty you would expect a little more fire, brimstone and fury no? I mean seriously, what did they capture?

And let’s jump all the way to the original evidence. Let’s not forget the time period where demons were blamed for every ill that happened. Mental illness was a demon. Getting sick was the devil’s work. Spoiled crops were a curse. So to be honest, the original story has the same hysteria associated with it that caused all the problems in Salem. It’s really hard to believe that this story is anything more than simple superstition and paranoia.

One Response to Ghost Adventures – The Bell Witch Caves – S10E05