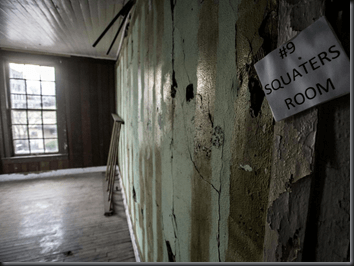 We’re off to the big state of Texas, to visit the Magnolia Hotel. The hotel was built in 1840 by James Campbell. Alas, he wasn’t able to stick with his business venture too long as he was scalped, stripped of his clothes and stabbed 27 times by the local Indians. My goodness, he must have done someone wrong!

The legend also speaks of a little girl named Itsy that passed away at the hotel. It’s claimed that even before her murder, Itsy had a less than amiable life as her mother would lock Itsy in her room when she went to work. I’m surprised this wasn’t a woman in white, a prostitute and a jilted lover. That’s usually how these stories go.

Another spirit, that of Idella Lampkin is said to visit the hotel. She was a fortune teller that would give readings on the premises. The owner claims that Idella speaks to her from time to time. The owner also just happens to do genealogy and locates a relative of Idella. Tnisha Sutton comes to pay the location a visit and she claims to have the psychic gift as well.

As a final piece to the legend is that of William Faust, who attempted to murder his estranged wife at the hotel. I say attempted, because he didn’t succeed in killing her because she wasn’t there. Instead, she had switched rooms with a friend’s daughter. When Faust realized his mistake, he attacked his wife and made her blind. Seems she got the business of an axe.

There are claims of hearing the little girl and seeing her figure. There are claims of getting scratched across the face like William’s wife. And there are also claims that Idella is still on the property. Interestingly, it’s the owner of the hotel who makes most of the assertions. Idella speaks to her. She sees the little girl. She feels the presence of William. Taking every word at face value, Zak asks if the place is haunted. The owner of course says it is and that’s all Zak needs to hear. He completely dismisses the guy in Seattle, but he’s totally on board for this one. But yet again I point out, it’s really hard to take these sorts of claims too seriously when it’s the owner of a business making them. Oh my, how much will business improve if someone investigates the hotel and says it’s haunted? How much extra will she charge for you to stay in one of her haunted rooms?

So what happens during the investigation to support all these claims?

As the investigation starts they hear footsteps. Nothing new there, we pretty much hear those in every single episode now.

They decide to bring Tnisha in for the investigation and she asks if Idella is around. She says she gets a bump or a push in response. Additionally, Billy sets up a new piece of equipment, the Electromagnetic Microphone. It’s supposed to light up when the right kind of energy is near. While they try to talk with Idella, they get a couple of bangs and bumps.

Meanwhile, Zak heads off to the room where the events of William Faust took place. They hear bangs, but it turns out to noises from the room below. This once again proves that just because they hear noises, like footsteps doesn’t mean they’re paranormal. They are proving that sound is travelling from other parts of the house or down the road as in the case of Tombstone and that all these noises can have perfectly normal explanations.

However, they press on and try to taunt William. The temperature in the room drops to the sinister 66.6 degrees. We all know where this is going. You know, sometimes a temperature is just a temperature.

As they continue the investigation, it’s time to bring out old reliable. Zak starts with his, "I’m getting powerful emotions". You can’t quantify these so it’s always a good way to go to establish the paranormal. He continues by explaining that he’s feeling the energy from different people and that all these spirits are passing through him. You would think with so many spirits running around they would have captured a lot more evidence by now.

But wait, there’s more. Zak brings out the ever crashing SLS camera which is basically a Microsoft Kinect device hooked to a monitor. It detects there is a small figure on the bookcase. It lasts for a moment and then disappears. They believe this was Itsy or a little girl at the very least.

Right after this, Aaron walks straight into a chair. This gets turned into a super paranormal moment as Zak says the chair didn’t move and now it has a hand print on the seat. Moments later, the hand print is gone. Clearly the chair was stopped by and unseen force and clearly the hand print is paranormal. There is no way that Aaron, in the dark, tipped the chair at an angle which stopped it from moving and in his surprise did not put his hand on the seat to steady himself. There is absolutely no way these two things could have happened under anything other than paranormal means.

In the bottom of the house, Billy and Jay come face to face with a real horror. They have a raccoon on their hands. The large varmint has apparently made his home down there. This in no way could be mistaken for the footsteps they heard earlier or any other noise in the house for that matter. I’m almost wondering if this is what scratched someone on the face, in the dark, when they weren’t looking. Additionally, Jay feels that some sort of energy comes rushing at him.

While they don’t collect any real evidence down there, Jay has a very bad experience with the cellar door. Not only does it come crashing back down on his head as he’s trying to leave, but his hand bashes through the rotting wood and he takes a pretty nasty tumble. While this looks like it seriously had to hurt, I’m surprised this wasn’t ruled the work of the paranormal. Perhaps the local Indian spirits are seeking revenge.

Finally, the team gets together and turns on the spirit box. This would seem to be Aaron’s cue to start acting ill. He says he feels sick and is ready to black out. Of course, there are orbs of light in the area which Zak assumes are entities going after Aaron.

To be honest, this episode was a steamy pile. Right from the start they believe every ghost story they’re spoon-fed by the owner, who just happens to know all these stories, yet doesn’t have a single piece of evidence of her own. This entire thing comes across as a commercial to "come stay the night at my haunted hotel, if you dare!" I find it really hard to believe people who have a commercial gain by their business being haunted.

But aside from that, what did they capture? Some bangs in the night? The feeling of powerful emotions? Seriously, what tangible piece of evidence do they present? They have barely any more evidence to go on at this site than they did in Seattle, yet that guy is a faker and this place is haunted.

I just don’t get it. Nor do I believe it.