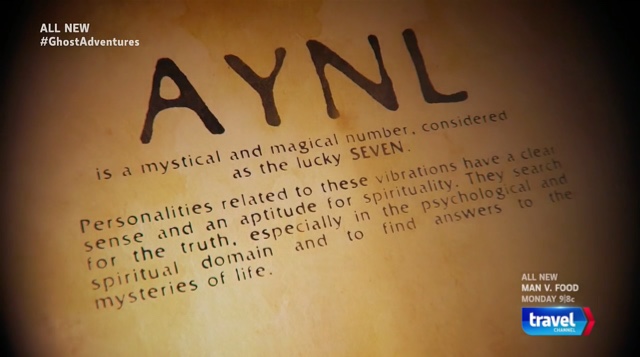 It’s time for a new Ghost Adventures episode in the old gold mining area of Mokelumne Hill in California and the stories have more cliches than you can shake a dowsing rod at. We have the womanizing hotel owner killed in one of the hotel rooms, a woman in black pining for her lost child, the lost son of the hotel owner who supposedly died of Scarlett fever, a demonic spirit pretending to be a little girl because that’s how they do things, a dark, growling presence in the remnants of the basement that used to be a jail, and dark forces conjured by someone using the Ouija. And not just dark forces, but the dark force, the biggest hoax of them all, a Ouija that spelled out Mama and Zozo, the two easiest words to spell on a Ouija.

From the beginning, Zak repeatedly says the hotel is overrun with dark energy, even before he steps inside. He doesn’t need evidence, the legendary stories speak for themselves.

And a torture chamber is the best area for Zak to bring out the Ouija, despite his numerous and adamant cries that the Ouija should never be used.

There will be no contact with Zozo as the name ANYL comes through. A name which Jay is somehow able to look up and associate with the number 7. He must be looking at a special website as that is a difficult answer to find.

What’s interesting is that when Ouija answers don’t make any sense, it’s merely the spirit world toying with you.

Just as the investigation starts, it stops again. We only get a minute or two into proceedings before Zak is overcome with dark energy and needs to go outside. And after rolling around on the ground and gathering his thoughts, Zak feels he sees figures running into the basement tunnels. However, they find no shadow figure or any other evidence and decide to return to their haunted rooms for the night.

Billy is in Room 7, where George Leger was killed. He asks the Paranormal Puck if George was murdered and gets a 7 as a response. The coincidence of the 7 proves George’s presence in the hotel.

The main excitement comes from Zak’s room where he feels cold spots, even though they are not on the thermal imager, and feels a light anomaly is hovering just in front of him.

Zak is able to prove there are cold spots by using a new device with crosshairs that detects which direction the cold is coming from. To prove it can track things, Zak moves his hand around and the lights go off in each direction. Since it can detect him, it can detect the paranormal. Obviously no interference.

But there is more to the night as Zak hears the door knob to his room rattle. This rattle coincides with Zak rolling over to the side in the admittedly noisy and springy bed. This is followed by a series of blips on the Spirit Box that Zak feels are multiple voices, including a demonic one. It’s demonic, because it’s a little girl.

This encounter fills Zak with rage and like a scene from Paranormal Activity, Zak goes down to Billy’s room and stands there. Despite Billy jumping at every creak and thud in the night, he is completely unfazed by Zak opening the door and standing there.

Zak declares he’s angry and starts punching at the swinging doors. Billy is unmoved by this as well, but this anger proves there are demonic forces at work. However, all you need to do is talk sternly to demonic forces and tell them to leave you alone.

That’s not the end of the story though. There is one more paranormal trope to throw in. Because of his aggression, Zak feels he is a danger to the crew and leaves the hotel. As he returns to their other hotel, he sees the figure of a woman jumping out onto the road, trying to cause an accident. While not expressly said, she’s probably a woman in white hitchhiking along the highway.

All things considered, Zak feels the Leger Hotel has experiences that stick with you long after the investigation is over.