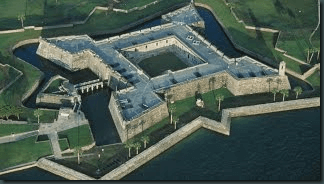 The boys from Tennessee head down to St. Augustine, Florida to investigate the 17th century fort of Castillo de San Marcos. It’s got a long history including being used as a military prison. There is even an execution wall where prisoners would be lined up and then shot. The claim of the paranormal include apparitions, voices and the disembodied head of a Native American chief.

As they begin they get the word, "afraid" on the phonetic generator and Porter is informed of a supposed love triangle where a captain fell for a woman named Deloris, but she was already married. The story goes their affair was discovered and they were entombed in the lower part of the fort, Cask of Amontillado style.

On this first day, they also capture orbs floating around, the words "troop" and "government" and what they believe to be a shadow figure on the ramparts. They try to stir things up with another reenactment, this time of a prisoner being lead out to be shot at the wall. During this event the phonetic generator comes through with the word, "murder" while the K2 meters go off. Additionally, they play the flashlight trick where it flickers on and off.

For the second night, they devise the Peripheral Para-vision Camera Mount, which is another way of saying cameras that look at mirrors placed at an angle to represent looking at something out of the corner of your eye. They also put together some goggles that force you to look at things from that same perspective.

As they sit in the courtyard and talk about the ill-fated Deloris and her lover, who may have watched each other starve to death, there are flickers on the K2 meter and the word, "chain" on the word generator. They also hear what they believe is a deep breath and the sense of being choked.

When they look at the evidence, they show an orb moving on the left portion of their peripheral camera. There is also what looks to be a walking shadow figure and what might be a heat signature on the ramparts of the fort.

But before we get too excited, let’s jump all the way to the beginning and take note of a couple key things. Each piece of history they’re told comes with the words, "the legend says" or "the story goes" which basically means, they don’t have any evidence to support what they’re saying. I’m sure it makes for a great story and adds to the legend of the Native American people, but why would a "doctor" cut off the head of an Indian chief? There is no evidence to support this story as real. To spice up the story, the head is missing and even these guys are saying the lights they see are the head. The point is, they’re claiming to find evidence for stories that most likely never happened. Isn’t that like finding clues at the scene of a crime that never took place?

On the surface, their evidence is interesting with words that fit perfectly within the environment. However, there is nothing to show how those devices work or even if they do work. The shadow figure is interesting as it does appear something is moving. That would be worth looking at some more, but as for the rest of the stories and evidence, I think the "evidence" is being twisted to match the legends.