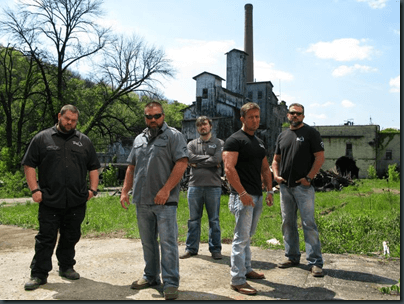 In sticking close to home, the Ghost Asylum team heads to Kentucky to investigate the remnants of the Old Crow Distillery, that dates back to the 1830s. Dr. Crow put together a special mash, but as of late, his recipe has been changed and the old doctor might not be too thrilled about it. However, it might not be the doctor lurking in the shadows as there are tales of multiple accidents from the distillery days. They know of at least one where a man was injured in the freight elevator. While they keep referencing that he was crushed, it doesn’t sound like that’s the case. His foot may have been crushed, but he actually died a couple of days later in the hospital from his injuries. The end result is the same, but the circumstances are entirely different.

But to be sure, working in a giant still back in those was dangerous business indeed. The working conditions were pretty poor, safety certainly wasn’t a concern and just about everything in the entire complex was flammable and a ticking timebomb of disaster should something ignite.

It’s said the doctor is still wandering around, even though the place has been abandoned for years. However, construction has begun to renovate and bring the still back to working order, and this may be stirring up the spirits.

Chris meets with the new owner and he’s quick to point out he thinks there might be some other worldly things going on. The details include the sound of someone coming up the steps and the lights flashing on some sort of meter. Not exactly precise evidence of the paranormal.

For the first day of the investigation they hear noises as though someone is moving around. That’s not too surprising since they’re in the woods and the place is overgrown with trees. Brannon immediately jumps to the demonic as the word "Satan" pops up on their phonetic generator. Sure, it can be a scary word, but what about this place makes you think of the demonic or demonic forces? Other words that pop up are, "heavy", "preacher" and "pawn". As they walk around, Doogie keeps feeling something is touching him and walking up right next to him. We also have a couple of renegade orbs and again a feeling from Doogie that he describes as vertigo while in the granary.

For Day 2, they construct the Wraith Casket trap, which is supposed to heighten the senses of fear and anger so as to fuel the spirits. With that in mind, the goal is to put Porter in the box and have his fear of being buried alive fuel the spirits.

As they sweep through the buildings, the lights and meters surrounding the coffin begin to go off. Porter himself says that he feels cold air blowing over him even though a breeze wouldn’t be able to reach him. He keeps feeling chills and hearing noises. But the cold breeze changes to hot and Porter feels something around his feet. As the K2 meter blips rapidly, they pull him out and contain whatever was with him inside the coffin.

I feel there are several misleading pieces about this place. I am sure there were deaths at the distillery, but the one they’re focusing on doesn’t really fit. He was injured and he died, he didn’t suffer some heinous death on the property like they keep saying. Dr. Crow died on the property, but again, he lived there. Dying at home was common during that time. It’s not like he suffered some terrible accident or was murdered or some other violent incident. They are over-hyping these stories to ridiculous proportions.

The noises they hear are just as likely from the animals roaming about in the woods. And as far as Porter goes, he says his fear is buried alive, and so we should expect him to have anxiety and all sorts of experiences when locked in a box. I’m sure we’d all feel something similar.

Now, there were lots of flashing lights and plenty of excitement, but it’s hard say that is evidence of the paranormal. Who’s to say those aren’t reacting to the energy of the room  such as that coming from the guys themselves?

It’s an interesting story and an interesting place, but it’s a bit of stretch to say it’s haunted with all sorts of paranormal events. And that trap of theirs was just silly. On the one hand, who doesn’t want a coffin like that, it’s pretty snazzy and would make a great prop for all sorts of things, but let’s be serious, that is in no way a scientific device. It really is just a prop. Kind of a high tech one, but still a prop.