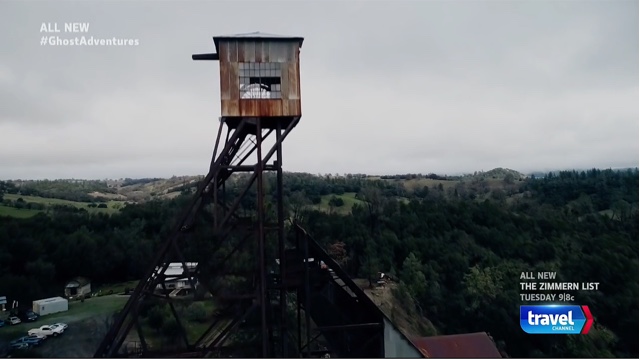 While still hanging out in California, Zak and team investigate the Kennedy and Argonaut mines. Both had terrible working conditions and accidental deaths, while the Argonaut was the scene of a terrible fire that killed 47 miners. It is listed as the worst mining accident in California history. But Zak feels it’s more than just an accident and that something evil is down in the tunnels.

This is confirmed by a conversation he has with George, who was scratched or as he claims, “branded”, while doing an investigation in the Mining House. And not just any scratch, but a scratch that made him lose his mind, filled it with dark thoughts and has since given him “flashes”. He says it’s a struggle for him to even talk about the mine, and had the cameras not been on, he never would have step foot on the premises again.

Connie agrees with George, because she felt a wall of negative energy. Nothing actually happened to her, but she felt like she couldn’t go inside the house.

Donna has an equally troubling story about a growl she heard. Even though there are mountain lions and plenty of other animals living in the woods that surround the house, the growl was definitely paranormal because it didn’t come from outside.

As they get George inside the house, he gets weak and has to sit down. It seems George might have a few other problems that he needs to tend to.

They start the investigation by splitting up with Billy and Dakota going to the Argonaut mine while Zak and Aaron stay at the house.

Dakota and Billy hear a scream, which Zak interprets as a death cry. Not sure why he would make that assumption rather than it being an animal or creaking metal. Billy brings out the paranormal puck and gets the number 7. Billy and Dakota draw the conclusion that this is the number of entities around them. Billy asks for them to make a noise, which he gets. Keep in mind though, they are in a rusted out mine after a rainstorm, it would be hard not to get a ping from the falling rain and stressed metal.

But when asked if the spirits have a message, they get “indirect”. The two of them quickly weave a story that the entities won’t give them a direct answer and will instead just use knocks.

Back at the mining house, Zak gets an unexplained light at the of the hall. Except it isn’t unexplained, it’s the reflection of his IR light off a sink. That certainly proves how things can be misinterpreted.

As Zak continues to wander around, he claims to get “fight me” and “get outta here” on the recorder. He immediately asserts “get outta here” is a warning because an evil spirit wants to fight him.

Done with the house, they attempt leave and meet up with Billy as the Argonaut mine is pretty far away. Ironically, when we first started the episode, Zak said it was merely a stone’s throw away. But as they leave, in the shadows of the fog, Zak feels he sees something. In yet another act of cowardice, he tells Aaron to stay behind and check it out.

This causes Aaron to go back into the Mining House, where the spirit box has mysteriously shut off. Since their junk device has failed, it’s more signs of the paranormal. This prompts Aaron to bring out the Ovilus where he gets the words, “yourself” and “reason.” Aaron weaves this to mean he’s by himself and needs a reason to be there. This is followed by “bury” and “dirt” which clearly references buried miners, even though that’s a different location all together.

It’s interesting and predictable that Zak weaves in every cliche we’ve every heard about mining, and mixes in evil and dark energy. Despite how George and Zak want to spin it, getting scratched while wandering around in the dark isn’t getting “branded” or a sign of the paranormal. It’s a sign of being clumsy and not knowing where you are. And if you feel like lashing out at someone for no reason, perhaps it would be best to see a medical professional rather than blaming entities.

And it’s also confirmed that Zak has a habit of misidentifying objects and that his claustrophobia and other fears, easily gets the better of him.

One Response to Ghost Adventures – Kennedy Mine – S16E03