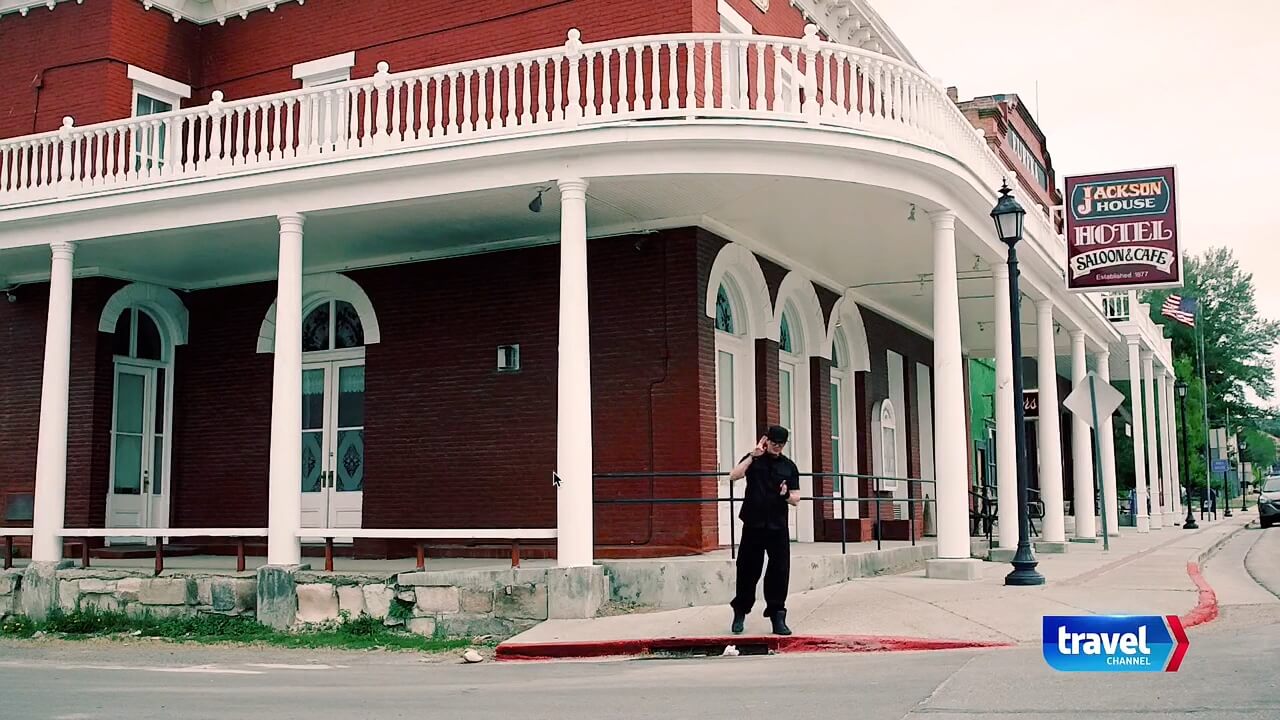 Out on the lonely roads of Nevada, Zak and team visit the Jackson Hotel and the Eureka Saloon, in the town of Eureka. Established in 1864, it was a boon town for silver, producing massive amounts and employing workers from multiple nationalities. Zak is hunting for the "dark energy that effects every building in this town."

They first talk with the hotel owner Kim, who explains that guests check out within minutes because of a heaviness and feeling of being threatened. Guests leave because the rooms look like crap and don’t have air conditioning.

As Zak goes to the Jackson suite, hotspot for all the activity, he gets the phrase "can’t talk" and "entity". This proves there is an oppressive spirit that won’t let the other entities talk.

Next is a completely pointless interview with Adam, who wants to be dark and mysterious about the entity in the hotel. He knows who it is, but isn’t allowed to say. Some hints, but no name.

This is followed by an interview with Allie who says she has problems sleeping and suffers short term memory loss because of a scratch she got from an entity while cleaning the bathroom. Both of these would be medical conditions, not side effects of the paranormal.

Zak moves to the Eureka Saloon to speak with Richard, who immediately identifies the person Adam was so mysterious about as Angelo C Florio, previous owner of the Jackson Hotel.

The Eureka Saloon is over what is known as the "Underground Cathedral" as series of tunnels built by the Chinese workers of the day. Aaron and Jay linger in the tunnels and Aaron feels something push them apart. In the replay, Aaron reacts to Jays outstretched hand rather than something ethereal.

Since there are two locations, they split into groups with Zak and Billy in the hotel, while Aaron and Jay take the saloon.

After a long pause of silence, Aaron finds a tied up cord of wire in the shape of a noose. This immediately prompts the spirit box to say, "hang" and then "reverend." That’s not really a noose, but an electrical cord twisted up so it doesn’t dangle to the floor. But it looks neat in the dark, so go ahead and call it a noose.

Since they are so scared of this wire, they bring out the rosary they just happen to be carrying in it’s box. Once on the noose, Aaron says it smells like urine. Pretty convenient. They don’t stay as some sort of noise forces them to run down the stairs.

It’s then time for the "cathedral", but not before leaving a bible on the bar counter. Conveniently again, they get the word "bible" on the Ovilus, which is followed by "reverend." Zak is "blown away" by the coincidence. But there’s more as "bury" and "under" appear. This creates the story of a reverend that was hanged and buried in the cathedral under the saloon. Quite a story. Too bad they didn’t check the papers to confirm.

Back upstairs, they ask the entity to knock over the Bible. This doesn’t happen, but they hear a noise, which finally gives us Aaron claiming he’s going to throw up.

In the Jackson Hotel, Zak and Billy head to the Jackson Suite, where Kim claims the entity caused a mirror to fall. No mirror falls, but they hear a noise and almost run out.

This prompts the usual reaction of Zak saying something is around him and he doesn’t feel good. In the Suite itself, the SLS camera detects a stick figure for a fraction of a second. Zak sends Billy into the bathroom rather than investigating himself.

Moments later, a stick figure jumps on Billy, which he sees as black swirls in the mirror. Amidst the yelling and hysterics from Zak, Billy freaks out and runs from the bathroom.

Now that they’ve made contact with something, they bring out the Spirit Sweep Device and sit in the hallway rather than the room itself.

With all the fiddling Billy has done to the device, there is a massive amount of reverb so all the sounds have a ghostly echo to them. While they don’t get anything, the hairs on Billy’s arm standing on end proves there is an evil entity.

For another experiment, Zak fogs up the mirror in the bathroom. Why? Because Kim, who’s watched too many horror movies, claims the words, "I am watching you" appeared in a fogged up mirror.

As the steam clings to the mirror, Zak shows the letters AMF and two dark eyes from a face. What is the significance of AMF? That’s AC’s first name, and the F is for Florio. Despite what Billy is yelling, AC is not a first name. A is Angelo. C is the middle initial. Billy has it completely wrong.

Further, words can appear in a fogged up mirror from the dust they collect. Also, someone playing around or being an ass, could have easily used their mortal and earthly finger to play a prank and now it shows up the mirror for other guests. Not paranormal.

Finally, Zak makes a stand against AC, which again isn’t his name, to stop being evil. This causes Zak to have a coughing fit resulting from Angelo channeling himself through Zak as a mysterious vapor.

The nonsense speaks for itself.