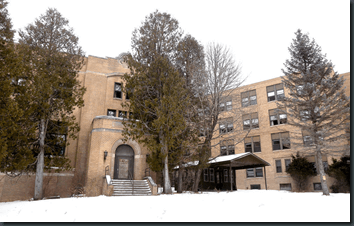 For our next outing, we’re off to Duluth, Minnesota to investigate the Nopeming Sanatorium which served as a tuberculosis ward during the heavy epidemics. As the story always goes, a trip to the sanatorium was a last ditch effort for the patients who rarely got better. Most would end up taking a final ride through the body chute on a sad trip to the crematorium. And as with just about every sanatorium, there are plenty of stories about patient deaths and their suffering, including a murder- suicide that took place on Mother’s Day and bars that had to cover the windows because patients chose to commit suicide rather than live with a wasting disease.

While the building looked quite impressive in it’s early days, the place is a rotting mess just waiting for the right time to crumble in on itself. The tunnel walls for the crematorium are showing some severe signs of distress with huge cracks and bowing concrete. Sadly, vandals have smashed in most of the windows and absolutely littered the place with trash. Pretty unfortunate state of affairs really.

We are also told that this area was home to the Native Americans and they used the land to heal their own sick and wounded. One of the members of the local tribe says the spirits have learned to travel on the wind and he can feel that cold air around him as he looks around the building.

As we get a history of the building, the death toll, and some of the horrible treatments – like removing lungs, we end up down in the tunnels that lead to the crematorium. This has been blocked off due to vandalism, but Billy, Jay and Aaron clear away the barricades and have a look inside. It’s creepy for the fact the whole thing is going to collapse. The concrete walls have split and look like they might break any minute now. Billy heads down the tunnel alone and wouldn’t you know it, his camera goes dead and he’s plunged into total darkness. While trying to light up the area with his flash, he captures what looks to be the outline of a figure on the wall. Was this just his shadow or perhaps something else?

After this quick look around they get the full investigation underway. Aaron is sent down to the crematorium where he feels a lot of heavy energy. Considering how ruined and destroyed the room looks, it’s not hard to feel a sense of dread down there. However, there are no voices, shadows or anything else to be captured.

Zak and Billy look around the upper floors where they get some sort of stick figure to show up for just a second on the Kinect camera. Zak also says there are light anomalies and orbs flying around so spirit energy must be present. As they continue to look around the rooms, Zak says he sees a woman reach out to him and ask for help. Quick on his feet, Zak breaks out the spirit box and gets gibberish that he feels is the word" help" while Billy says someone is tapping on his arm. So is there a patient still trapped asking for help to get out of this terrible place?

As the investigation continues, there are multiple bangs like the sound of door closing or people banging on the walls. They are heavy metallic bangs. Interesting noises, but again, it’s a broken down building that is clearly sinking into the earth itself. How do we know these sounds aren’t normal for a decaying building? Old buildings make strange noises, we can’t just jump to the conclusion they are paranormal.

Toward the end of the investigation Zak has a bad moment as he feels he’s being grabbed and pulled by something unseen. It is something unseen all right, wires hanging from the ceiling. He gets himself tangled and as we watch the slow motion replay, the wires wrap around his leg. While this was certainly funny and shows Zak can lose his cool quite easily, you have to admit, you’d soil yourself too if you were in the dark and got wrapped up like that. Zak isn’t quite the fearless warrior he pretends to be, but at least he had a real reason to panic this time.

So in the end, what sort of evidence do we have here? We have bangs, which are odd, but can just easily be the building sinking. There is nothing to suggest these are paranormal bangs. Put you cameras in there overnight, turn a bunch of lights on and see if you get the same noises. Besides the bangs we have the shadow figure captured by Billy. Certainly interesting, but are we absolutely, beyond any doubt, sure that’s not a reflection or shadow cast by Billy himself? And as far as the orbs go, let’s be real. I am always convinced those are just bugs flying around, it is an open building ya know. Besides, when you slow the footage down it looks like those orbs have wings. And despite what Zak says, bugs can change directions on a dime and fly at 90 degree angles.

While this place is creepy as hell and looks like the scene from the worst horror movie you can imagine, I don’t feel the captured any real evidence to support the paranormal claims. The shadow is the only interesting piece, but considering how easy it is to take a bad picture and say there is a mist or a figure or a shadow, it’s hardly enough.

While the patient stories may be real and building is wonderfully creepy, it’s a wide stretch to say it’s haunted.

If you want to learn more and see more photos, check out Substreet.org. There is some pretty sweet stuff over there.