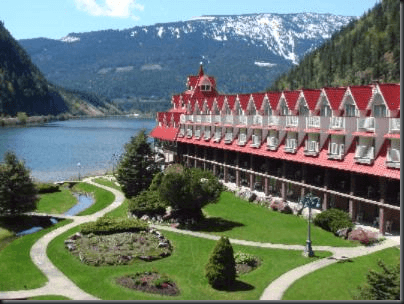 First of all, this episode was awesome! It was the most exciting and nerve racking one so far. There were plenty of chills, scares and tense moments the entire way through. The trio was great to see in action and they immersed themselves in the experience! Let’s not dismiss the awesome driver who shows up in what looks like a dumptruck or work truck, whisks them through the night to the hotel, drops them off, then turns and leaves. Could this look any more like the start of the Shining? And right as they walk in the door, the resident cat scares the crap out of them!

For this episode, Princess (the skeptic), Yarc and Steven (the believers) head to British Columbia to investigate the 3 Valley Lake Chateau, a beautiful hotel nestled up against the mountains and fronted by a beautiful lake. It started as a small 20 acre hotel, but has grown to sprawling, albeit confusing hotel with well over 200 rooms. The picturesque scenery is deceiving because this is supposed to be a hotbed of paranormal activity. There are claims of footsteps, conversations, doors open, dark figures roam the hall and in Room 328 there is a dark haired woman appears at the foot of the bed and screams at visitors. The reasoning behind this activity is a little unclear, but as we soon find out, there are indeed things that go bump in the night.

Quite literally on their first night there is a loud bang that startles them all out of bed. Unfortunately they are too tired to investigate. But it looks like they are in for an eventful stay.

And indeed it is. On the second day, Princess asks for a sign in a rather taunting tone. Next thing she knows the battery in her camera is dead and Steven says he hears footsteps above them. They go upstairs and find all the chairs turned over and the room is a complete mess. Was it left this way or did something just happen? This is Room 328 where the "shrieking woman" makes her appearance. As Steven lays in the bed and asks for a sign, Princess jumps off the small desk after hearing something. This is followed by even more footsteps and the sound of something else being knocked over. The team is overwhelmed and takes off for safer ground.

The next night the head to the Bellevue Wing where a guest reportedly hung himself. While there they cat makes another appearance which paralyzes them with fear! That cat is evil! Now, they begin to hear footsteps, but is that just more of the cat walking around?

For the next part the head to the pool area which has been made up to look like the deck of the Titanic. An ill fated choice to be sure. There are reports that a figure can be seen at the bottom of the pool and it actually grabs people. The trio decides to get into the pool to see what happens. Steven and Princess go first, but they didn’t last long as Steven bails out within seconds saying he felt something. Yarc and Steven head back in, but they cut and scrape themselves to pieces as they rush out of the pool after hearing some growling or grinding noise. After they gain their composure and bearings it turns out the noise is coming from a fan. A fan that goes off twice just to mock them. Is that fan having a short or did some unseen force turn it on? There could be a perfectly normal explanation for that one, but it clearly scares the shit out of them. Steven is bleeding because of his hasty retreat.

For the final night they go to the theater where there are reports of music and phantom performance that still goes on. As Princess asks for a sign and Steven goes on the stage, the lights come on right in front of him. In a mad dash he is out of there! We come to find out when they stomp and tap the lights go off. This might be part of the show, or it might be a short, but not paranormal.

As they do a final check of the pictures they took, Princess notices a shadow on the wall. There is a clear figure of something, but is this a shadow from one of them or is it the shadow of the "shrieking woman?" Either way they head back up there and demand to have a sign or they aren’t leaving. The room is very cold and then suddenly the elevator decides to show up. Why did it go back down when they are the only ones there? Either way, that is enough for Steven to feel something is telling them to go, only the elevator loses power and they get stuck inside. The elevator simply loses power or refuses to move for about 10 minutes, but then without anyone doing anything it powers back up and then go back downstairs.

Their driver, George said some places had power while others didn’t. Was this simply an inconvenient power glitch or was there something else at work? Either way, being stuck in the elevator in the dark with all that going on would be nerve racking to say the least! That alone could bring someone to their knees!

Just about everything they experienced in the hotel turned out to be a perfectly natural occurrence from the lights on the stage, to the fans going off, to the cat jumping out at them. But the elevator getting stuck was a little unusual, if not extremely coincidental. The timing of the fans was pretty interesting if nothing else. The footsteps might have been the cat, perhaps another animal. And the bumps may simply be the building settling. Room 328 being a complete mess was a little strange though.

I had a great time watching this episode. They debunked a lot of things, but there are still some events that seem a little odd. They have some evidence that is worthy of more investigation.

Paranormal or not, at night that place will scare the hell out of you and keep you on your toes. If nothing else, they need to address the wiring in that place!