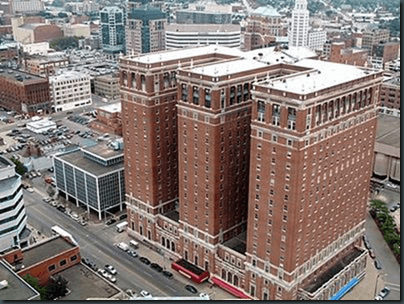 Our next outing on Paranormal Lockdown takes us to New York to investigate the Statler City Hotel. It was constructed in 1923 and became a high spot for entertainers, musicians and even Presidents. And apparently Al Capone did some business there, a mob connection they are going to hold onto throughout this episode, thus the unusual disclaimer at the start.

Conor Hawkings is the property manager and claims to have heard footsteps, had doors closed on him, has been touched and even spoken to. Their main piece of physical evidence is from a wedding photo where a black shadow figure can be seen lurking to the side of the guests. There is also the story of Mary Jean, a lonely 22 year old who committed suicide by jumping to her death from the hotel.

For Day 1, they head to the lower levels and the Turkish bath where it’s claimed stones are being thrown at workers. As Nick and Katrina look around, they indeed hear the same rocks. However, a quick look around the area shows it’s a shambles of construction and decay. It’s hardly a stretch to reason that debris is falling off the ceiling or walls and with the echo it comes across as sinister and someone throwing rocks.

For Day 2, Nick and Katrina pay a visit to the restaurant meat locker and the room where Mary Jean jumped. On the devices they pick up "girl", "ghost in the cellar" and "Mary." There are interesting things to note. First, Katrina shows plenty of filler around the windows which explains knocking, footsteps and bangs. Second, the device is speaking words in the background which everyone is ignoring. Again, the device is spouting out words and they choose which ones to run with.

As an experiment, Katrina moves some furniture around in the dining room. Her hope is the spirits will tidy the place back up again. As they work, Rob and Katrina feel they hear a muffled moan.

Day 3 starts with a review of the evidence where they see a chair move in the Terrace Room. To add to the drama, the lights on the wall mysteriously go out, which of course can only be explained by paranormal means, not someone flicking a switch. Further, Nick turns on the Wonderbox and gets the words "dismemberment" and "pool". When they try to get more information, they get the words, "not a guest", "a snitch" and "I was in the drum." These all capitalize on the mob hit notion they put forward from the beginning.

Now with the idea of the mob hit, Nick heads to the meat locker where they get "he sent his men". The next parts are blanked out since they supposedly contain names.

By the end, we are lead to believe a mob hit took place in the hotel. That as may be, but it was the 20s and New York, I’m sure there was a mob hit in every building during that time. The words and phrasing are interesting, but again, the devices put out a lot of words so it’s go with hits and gloss over the misses.

The chair moving was pretty interesting, although they don’t seem as intrigued as I thought they would be. Most of the activity has an alternative explanation, however, there are a lot of interesting voices that might be worth a second look.