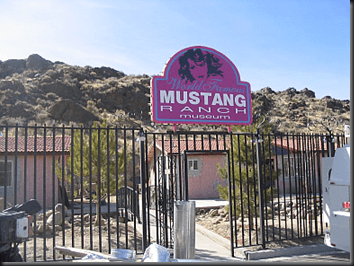 Right off the bat this comes across as a rather dubious investigation as the team heads out to the Mustang Ranch, just outside Reno, Nevada. And the overly dramatic and incredibly cheesy reenactments don’t do anything to deter that thought.

But the guys have been asked to check out the Ranch because of multiple claims by the working girls who have been grabbed, touched and held down by an unseen force. Even the Madam claims to have felt a hand reach in and squeeze her heart. Oddly, on the day the guys show up, one of the housekeepers quit her job not being able to take the spirits any more. A coworker confirms that she has seen spirits and then identifies the spirit as the boxer when shown a picture. Several of the girls have also said they’ve gotten bruises on their chest from something grabbing them

It shouldn’t come as any surprise that the Ranch has a sketchy past, the most notable being the affair between boxer Oscar Bonavena and the madam of the Ranch. Regrettably, the madam was married and the husbands body guards shot Oscar dead just outside the gates.

As the investigation begins the guys get plenty of EVP responses talking of a cleansing, burning, an affair and references to the gun shots. There are even responses that "Oscar" feels everyone is going to hurt him. Strange, since he’s a boxer.

There is also a comment made that "Paul" is the one touching the girls’ shirts and also claims there are 7 spirits at the Ranch.

The big EVP is the response to the question, "were you killed?" The answer is "demons … Go to sleep". It’s a very garbled answer and doesn’t really make sense. Zak is certainly looking for a demon explanation so perhaps this is his validation.

Besides the EVPs there are two physical pieces of evidence. One is a mist Zak believes he sees in the hall and the second is the fluttering Do Not Disturb sing that hangs on the door. This is the same room, same door, same sign that actually flew off the knob and then slid back under the door.

Some of this evidence is interesting, while most of it seems irrelevant. I will agree that most of the EVPs sound like intelligent answers to questions, which is actually quite interesting, but many of the "demonic" phrases are so garbled as to be questionable. I really don’t think there is some sort of demonic presence at the Ranch and all this talk of Oscar haunting the place is total speculation. They’re trying to make a story out of nothing. They do the same thing with the Ovilus. They capture some words and then try make it fit into a story that makes sense for the environment. They’re filling in huge gaps with ideas that are "plausible" but completely fabricated.

I don’t want to be rude, but considering the type of work these ladies do, bruises would be part of the job and the idea of being held down could easily be a night terror, sleep paralysis or just vivid recollection of something that happened earlier. There’s really nothing to suggest there a spirit wandering around trying to hurt these girls.

What about the housekeeper? Maybe she did see something. Maybe she couldn’t take the job. Perhaps the nature of the job got the better of her. Maybe it was a real person and unwanted attention that she needed to get away from.

There was some interesting evidence, but I don’t think we have demons running around that’s for sure.