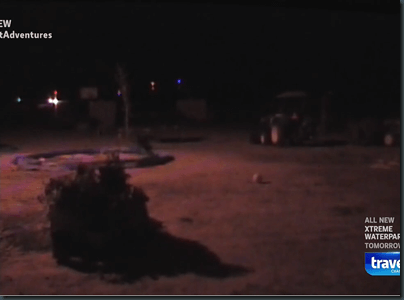 Zak and the team head to Upper Fruitland, New Mexico, onto Navajo land to investigate claims of a strange, faceless entity that keeps showing itself to the Harris family. Brenda, Ryan and their daughter, Holly, tell the same story of a figure in a plaid shirt with no face holding Ryan down one night. This entity may also be responsible for sending Robert, the father, to the hospital.

As they drive up, Zak talks with the neighbor who says their house is haunted and they’ve been told by the medicine man to tear it down. The son says he has seen trolls without a face.

On the Harris property, the main area of activity seems to be the trailer in the back that the family stayed in while the house was being built. While inside they hear footsteps and a series of cats gather around. Zak says he can feel a presence and even that he lost time. Billy captures some EVPs and when he plays them for Brenda, she darts out of the room and begins to pray. Supposedly, she has been told about some dark entity.

To check the grounds, they bring out a Geomagnetometer and get a baseline reading of 49. At one point it jumps by 7 to 56, which Zak feels is due to a portal to another dimension. He’s says that a lot lately.

As the investigation starts, they hear a loud noise from the trailer, like something falling over. That’s not a stretch as there are items stacked all over the place. While the wind is blowing, they hear what they think is a snarl. Also, not that big of a stretch since there is at least one large dog in the back yard. When Aaron goes into the trailer, he hears a scream and then a child’s voice. While interesting, that could easily be one of the half dozen cats wandering around or one of the kids next door playing. It may be dark and late, but that doesn’t mean kids aren’t outside.

In usual fashion, Aaron has his episode of feeling terrible, says he’s going to be sick and that he wants to lay down and sleep. He’s been terrorized by the sound of something bumping the trailer, which again isn’t that odd considering junk is stacked against the trailer and the wind is blowing. We also have bangs against the van, but you can clearly see a dog on the porch or one of those cats could have made a leap for it.

In the house, they see orbs and hear more footsteps. On the SLS camera, they see a stick figure without a head. On a camera covering the field, there is a mass moving back and forth in the distance. It’s can’t be human because it’s cold, so says Zak.

As Zak winds through the house, which is completely cluttered, he opens the crawlspace. At the same time, he feels the chair in the kitchen is dragged across the floor. But since the crawlspace is open, Zak tells Jay to go down there. Zak is really good at getting other people to go into scary areas while he hangs back.

In the crawlspace, Jay hears footsteps, what could be growl and the lid to the opening falls over. Zak concludes all of these are demonic and the lid fell over to try and trap Jay down there. It would be more realistic to say the footsteps and groan are from the boards settling or from the dog outside.

While Zak doesn’t uncover anything, he concludes the house has an evil entity and should be cleansed. It needs to be cleaned for sure. It’s a mess and is still under construction with things hanging from the ceiling, bare walls, bare floors, boxes, cans, ladders and shelves stuffed into every corner. Even the outside fascia is missing with plastic hanging all over the front and debris everywhere. It’s hardly a surprise you would hear odd noises.

About the only interesting thing is the footage Ryan captures of a shadowy figure rising up from the ground. It’s a phenomenon worthy of more investigation, but all the other encounters have more to do with junk piled against the house on a windy night than supernatural forces.