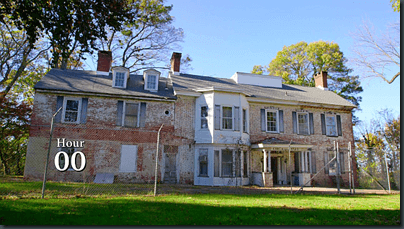 Nick and Katrina visit White Hill Mansion in Fieldsboro, New Jersey, built in 1722 by Robert Field. When he mysteriously drowned, his widow Mary and 7 children were left alone in the house. It changed hands several times to become a field hospital, a brothel and even a speakeasy with supposed tunnels leading from the house to the nearby Delaware River.

Now there are claims of the paranormal such as a child apparition running from floor to floor, voices, footsteps and the sound of a body being dragged. Some claim to see Mary Field crying at her writing desk. A tub upstairs is rumored site of a throat cutting. It is also believed a prostitute was strangled in the attic and mobsters murdered someone down in the basement and took him out through the tunnels.

But keep in mind, these are stories and while it’s almost impossible to think there hasn’t been a death in a house that has stood since 1722, the ones discussed are "believed" to have happened.

For Day 1, while in the basement, Katrina feels she sees a face sneak up behind her. When she makes a comment, there is a response of "sorry about that". In the attic, Katrina feels that something touches her arm.

With those being the main events of the day, Nick decides to sleep in the haunted tub, while Katrina sleeps in the attic. Nick puts out a motion sensor which does go off during the night. Not a big surprise considering how old, shaky and crumbling the house is. Anything moving close by could cause that.

For Day 2, they head back to the attic and as Rob sets up the 3D mapping software, there is a small stick figure under a table. They also believe they hear a child cry. The figure manages to stick around for a minute before disappearing as Nick moves in closer to touch it.

For Day 3, again in the attic, Nick asks if someone was murdered in this room. He gets an answer of "yes" and then "Cut his throat". This is followed by the equally garbled, "get out". Katrina feels this references the tub where the supposed murder took place.

As a final piece of evidence they get the phrase "Where are you daddy?" on the device.

While Katrina may be working herself into a frenzy of fear, very little seems to happen in this house. Because of ties to a field hospital, brothel and speakeasy, we’re lead to believe all sorts of dark forces are swarming around the house. What they walk away with is a stick figure on some 3D mapping software and Katrina being touched on the arm. A tap that comes in a room with low ceilings, odd angles and plaster/paint hanging off the wall for several inches.

There is certainly a want for the house to be haunted, as that would help the restoration budget. While there is no doubt the house has seen plenty of tragedy and death, the dark and sinister overtone of the voice over just isn’t there. Nick had no issues with any sort of figure behind the bar. Nothing happened to him when he slept in the tub. There were no footsteps, bodies being dragged or anything else for that matter.

Further, Nick says he found the exit to the tunnels, a bunch of debris clumped together, but not the entrance in the house itself. Does a tunnel actually exist?

Is there a child trapped in the attic as they want us to believe? That depends on how much faith you put in their 3D mapping software.