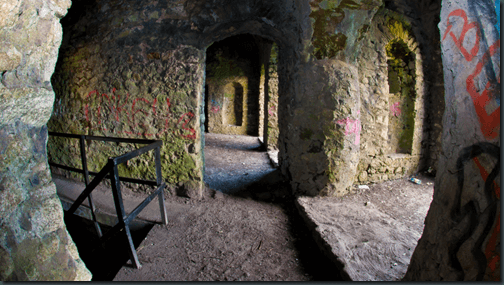 The first part of the investigation takes place in Scotland. A man reports that he was at Gilmerton Cove and saw visions of a woman being tortured and punished, shadow figures and felt he had his throat cut. He attributes this to the residual energy of the Hell-Fire Club.

The teams goes to investigate and Austin feels something is touching him on the back of the neck. Molly says she sees a shadow cross in front of the camera and as they follow it she says something comes at her. While I’m sure that’s an unsettling feeling, she has got to calm down. In every episode so far, she screams hysterically, yells out "no, no, no" when activity starts and is the first person to run away from the scene. Again, if you’re going after the paranormal, don’t soil your pants when you think you’ve found it.

Since they need to roleplay, they ask several questions and go through the motions as though Molly is their sacrifice. Austin asks repeatedly if he should kill her. When they review the audio they feel they hear a voice say, "lay her down for me" and when they ask if club members brought prostitutes into the tunnels, they get a "yes". Neither one of those sounds sinister, they sound more sexual. Considering rich guys were lurking down in the tunnels, the idea of hookers isn’t too shocking.

This is really all they get from Scotland so it’s off to Ireland for another investigation. This time they check out a hunting lodge at Montpelier Hill, a site rumored to have been used by the Hell-Fire Club. They bring along a cadaver dog to check to see if there are human remains in the area. The dog acts as though there are. They also get information about a Lord Santry who is rumored to be one of the most extreme Club members. It’s said he was a sociopath and prone to violence. According to a researcher, he believes Lord Santry set someone on fire. Sounds like old Lord Santry may have been the victim of syphilis. That sort of thing tends to drive you crazy and make you a touch hostile.

This is all scary stuff, but keep in mind, none of this is proven. It is "believed" and even the researcher says "he wouldn’t doubt" Lord Santry committed murder or that members did, but he has no documentation.

With all this new information, the teams heads into the hunting lodge to get to the bottom of the murders. It’s also at this point that the entire show becomes a complete load of horseshit.

Armed with an iPad that has a small piece of the indoctrination ceremony, Greg makes Austin a member  of the Hell-Fire Club. Austin feels someone touching him as they go through the ritual, then wants to be alone so he can make contact with his new found members. A few minutes later he’s standing off in the corner like someone from Paranormal Activity or Blair Witch Project. Austin, in some sort of trance, says he wants to kill Greg. Greg immediately says Austin is possessed. They also make the comment about his lifeless eyes. His eyes look lifeless because of the way the camera picks up the light. It will do that no matter who you are.

While in this "trance" Austin answers questions about the Hell-Fire Club. Greg demands to know who committed the murders. How shocking it is that Austin says Lord Santry? It’s the same name the researcher gave them and the only name they know. What a rare coincidence that Austin should say the same name. Give me a break!

Greg is convinced Austin is possessed and that they are talking to John Wilkes who was kicked out of the Hell-Fire Club. Austin gives all sorts of vague answers and in the end claims he doesn’t remember any of it and has a lapse of memory. Sorry, the whole thing seems staged, faked and smells like a big steamy pile of bullshit.

Every single thing in this episode is based on rumor. No facts are actually presented in any way and if you listen, every sentence is "believed" or "rumored". With a name like Hell-Fire Club I doubt they sat around reading poetry together, but everything we’ve seen here is wild speculation. Who knows what the hell they did in their meetings, but these jokers certainly don’t have the answers. And this whole possession thing is laughable.