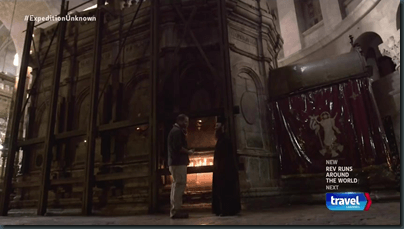 For this episode, Josh takes on a intriguing quest, to find wooden fragments from the cross of the Crucifixion. In simple terms, after the Crucifixion, the cross lost until Helene, mother of Constantine rediscovered it, cut it into sections and sent the fragments to different locations. The cross as a single object is gone, and there is some question as to whether it was a cross at all, but either way, where did these iconic pieces end up?

Josh heads to the city of Jerusalem, to the Church of the Holy Sepulchre, which is built on the site where the crucifixion took place. Josh gets permissions to go down into the caverns to where the event may have taken place. He is also shown pieces of a holy cross, said to be made from the crucifixion cross. He even receives a blessing from those very pieces. While no testing has been done, they are on a holy site and hold significant importance to the church. And of course, their power is in that belief.

To search for other pieces of the cross, Josh heads to Tel Aviv to meet with Professor Hershkovitz who says there are many misconceptions about the crucifixion. For example, the bodies would not have been nailed to a cross as we see depicted and it would not have been a cross, but rather an X shape. The process was to cause pain and suffering so this would have been the method. And as a bit more background, the wood used most likely would have been olive wood. So if Josh is going to test something, that’s the wood he should look for.

The next stop is over to Bethlehem where Josh goes to the Church of the Nativity. It’s under renovation with several interesting discoveries. Frescoes have been discovered under the plaster and one shows three different styles of crosses carved into the stone. This may be a marker as to where the cross fragments are buried, but they will have to scan the wall to see what might be hiding behind it. You can’t just take a hammer to a church. Interesting to note that one symbol depicts the X crucifix.

From there, Josh heads to Istanbul, which was the second capital for Christian Rome. It is said pieces of the cross were hidden in the Eye of Sophia. There is a massive network of tunnels and chambers. These tunnels may have been used by Emperors to move between buildings without dealing with crowds. They could also be used for storage of precious items. Josh is able to spelunk down into the tunnels and after working through the mud and unsavory air, they discover a portion that no one has been able to enter. It will take another effort to see what lies beyond. But at this point, nothing to indicate a hidden location for the cross.

For the final stop, Josh meets with a dig team at the city of Sinop where they previously discovered a stone chest and fragments they believe are part of the cross. They have also uncovered hundreds of bodies and Josh is on hand to help with unearthing what appears to be a family of four. Another stone box is found, but without any contents. The team believes such a box would have been used to hold something very important. There may be more wooden fragments in similar boxes yet to be discovered.

While there is conjecture over what a crucifixion "cross" really looks like, the pieces have been scattered all over the world. Without testing who knows which are real, and that will be a problem since those responsible for the pieces will most likely never let them out of their sight. But the search will go on and perhaps in a hidden alcove of a church or buried in a tomb, a piece will emerge that can be tested and verified as the true cross.