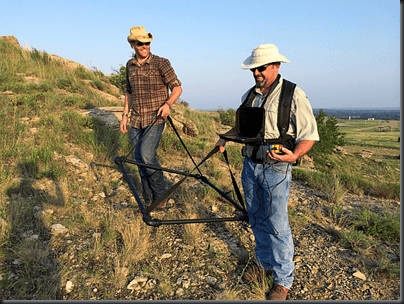 For our latest outing in adventure travel, we head out to Oklahoma to take a look at the legend of Jesse James and the gold he left behind. We’ve certainly all heard the name Jesse James and we may even be familiar with some of his deeds. He is famous for his gold robberies and of course the men he shot down. But there is one stash in particular that has Josh’s interest. Supposedly, there is millions of dollars worth of gold coins still buried out there.

Jesse James stole millions of dollars worth of Mexican gold, loaded it up onto 18 mules and made his way into Oklahoma. He was stopped by a blizzard and decided to bury the gold and mark it so he could return later to claim it. Before he could do that, he was killed by a member of his own gang, Robert Ford.

The gold is supposedly marked by some bullet holes he put in a tree and some other cryptic signs. With the help of some historians and treasure hunters, Josh will see what he can find. But first, it’s time to take in the local color with a spot of ribs and some fancy duds at the cowboy store. No Josh, put the chaps back where you found them.

The first stop is to visit the house where Jesse James was born and to get a bit of insight into why he became an outlaw. His father died when he was 3 and he saw plenty of violence and death and the outbreak of the civil war. Seems he had a taste for revenge and violence from the early days.

With that in mind, Josh tries to confirm if it was even possible for Jesse to make the journey with mules loaded down with gold. While it would be slow going, it is possible he made it to Oklahoma in the time allotted.

He then meets up with a treasure hunter who has been researching Jesse James for 40 years. He believes there is treasure still left behind in Robber’s Cave. He is able to show Josh markers that have been carved into the rocks that point the way to treasure. Bud Hardcastle uses dowsing rods to help locate items, but alas, all they have for their efforts on this outing is the lid to a tin can. Oh well, better luck next time. At least the scenery was nice.

Not discouraged, Josh heads to Cement, Oklahoma where another treasure hunter uses some more sophisticated equipment to find items. He meets with Jamie Dodson who says he has put together clues to the location of the treasure and he has a map outlining the area they need to search. While the legend speaks of finding "Jack", Jamie believes Jack isn’t really a person or grave marker, but a word spelled out on the ground. His photo does indeed show Jack spelled out with rocks in an area that matches a description in a note left behind by Jesse. While not giving away too much, Jamie appears to have a specific area he wants to investigate and uses a much more sophisticated metal detector to get the job done.

Josh helps with the search and they get an interesting set of beeps. Indeed, something is buried beneath the rocks. And it’s a metal bar. But Josh’s hopes of striking it rich are dashed as we learn it’s a lead bar and those are worth pretty much nothing.

So, no gold this time around, but let’s keep in mind there are indeed items still buried out there. Josh may have found lead this time, but what else is hiding out there? A California couple recently found a large stash of gold buried on their property worth a few million. So while searching for gold may seem fanciful, the loot Jesse James robbed has been found in a couple different places and it been worth a small fortune. If you happen to be down in Mexico and some guy is selling maps, don’t dismiss too quickly, there might be something to it.