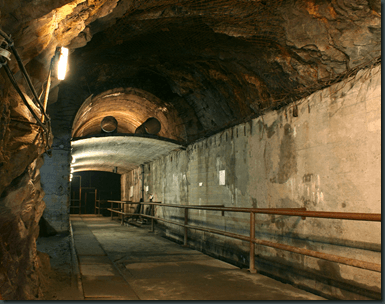 As the Expedition Unknown journey continues, we find ourselves in Munich, Germany on the hunt for hundreds of millions, perhaps even billions of dollars worth of lost treasure, stolen by none other than the Nazi regime and secreted away in miles worth of underground tunnels and bunkers.

The story goes, during the reign of Hitler, countless pieces of gold, jewelry and art were stolen to find the war machine and enrich the lives of the Nazi elite. Recently, in the apartment owned by an art dealer working for Hitler, a cache of stolen goods was recovered with an approximate worth of $700 million. It is believed that several billion dollars worth are still unaccounted for, including a vanished train car full of gold and truck loads of gold headed for Austria.

It’s also believed Hitler worked on secret projects such as constructing nuclear weapons. To be honest, it all sounds scary as hell.

Josh begins his investigation in the ruins of Project Riese, a series of underground structures. At first, it seems a little on the “Hollywood” side, a little Indiana Jones, but this stuff is real. Josh goes to where the gold train disappeared and low and behold, there’s plenty of man made structures. The team he is with lowers a camera down one of the shafts which drops straight into a mine tunnel.

They can’t enter this tunnel, but within another we can see left over machinery and a guard station. Much of the complex hasn’t been mapped so they’re not sure what they’re dealing with. They have found closed off rooms and pipes that lead nowhere, which sounds a little bizarre and sinister. Are these torture rooms, heavily fortified storage, or something completely mundane?

What we can see is a series of off-shooting tunnels and remnants of rail tracks. A huge amount of effort went into making and using this complex for the long term. If they put down carts and tracks, they were storing something pretty heavy.

Josh heads to Austria where he drives the best car he’s ever been given on these shows. But he’s off to investigate a more serious matter and it’s the idea that high ranking German officials used the lakes to hide their personal fortunes. Lake Fuschl could be the resting place of Hitler’s personal books, plus jewelry and gold. A fortune in wine and champagne might also be in the drink.

Using an ROV, Josh helps Wolfgang take sonar images of the area. It seems a little far fetched, but the ROV picks up something. There is a small boat on the bottom of the lake. As the ROV moves in for a closer look, they snag a champagne bottle. Not just some wayward bottle tossed in, but a full champagne bottle with cork intact.

What started out sounding like the stuff of Urban Legend and stories surrounding the myth and mystery of the Nazis, turns into some tangible evidence to support the truth of it all. Josh has definitely found buildings and tunnels that fit the stories and now he might have discovered proof of riches dumped into the lake to keep them from the Allies.

But it’s not over yet, Josh continues his investigation in Part 2 of this adventure. And it gets pretty damn interesting.