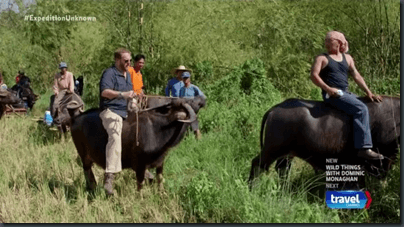 It’s been awhile since I’ve written anything about Josh Gates and his exciting adventures, but he’s back, and this time heading to Manila in the Philippines. He’s on the hunt for what is known as Yamashita’s Gold, a wartime bounty of gold and diamonds that was smuggled out of the country and like all good treasures, has since disappeared.

Josh begins the investigation in Manila and heads deep underground where the original base of operations for Yamashita would have been. It’s a series of tunnels, but there is very little evidence in regards to the treasure. But it shows Yamashita was no stranger to working underground and stashing things in hard to reach places.

Next, we head to Alaminos where there is talk of some sinister types working in seclusion and whisking away trunks of gold bars. According to local lore, the treasure is hidden in some man made caves and because of the haphazard way in which the treasure was both hidden and retrieved, plenty is still available to be discovered.

They head out in a small boat against a pretty rough current. And there is indeed a hole cut into the side of the craggy rocks. With no small effort, Josh and Evan make their way over and down into the cave. Josh finds what looks like some sort of rail system and several metal items. While there is no treasure in that portion, but it shows plenty of signs that someone was there.

The tunnels look like to be accessible from the other side of the island and they discover another set of openings and climb through. There is another network of tunnels and drill holes, not mention a couple of bullets that could be consistent with the time period the treasure would have gone missing.

The next destination is Baguio City, to meet with Henry Roxas. Henry’s father is said to have found the actual treasure, but due to government interference and possible cover up, he lost possession and was sent to prison under the rule of then dictator, Ferdinand Marcos. Henry has taken up the mantle and has some new information at his disposal.

He takes Josh to a secret location and into a massive cave system. We get an exciting journey by bus and buffalo to reach it. It should also be noted that Henry has memorized the location and clues and destroyed the map so they can’t fall into the wrong hands.

The cave entrance starts off pretty substantially, but quickly narrows into small tunnels. They discover one of the rumored booby traps, complete with bamboo spears at the bottom. And as Josh asks, if there are booby traps, there should be something to hide.

As they press on past the poisonous frogs and bats, they find tunnels that go in different directions. Using the metal detectors, Josh discovers what looks to be nails and comes across two coins. According to Henry, these would have been in circulation in 1944 and 1945, the time the treasure was making it’s rounds.

While Josh doesn’t unearth any treasure, he does make some interesting finds. There are several man made caves that have been used to house something. Perhaps it was this treasure, perhaps not. But with coins, bullets and possibly a rail system, there are some hidden goodies out there waiting to be discovered. You never know, one of those mysterious caves might be hiding a trunk full of gold bars.

But then again, if you dig a little deeper into Yamashita’s treasure, there are indications it might be nothing more than an a legend and no such treasure actually exists.