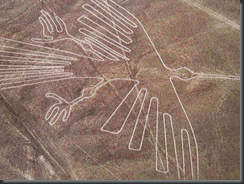 Josh heads out to Lima, Peru to investigate the mystery of the Nazca lines. These are the massive drawings that cover the landscape. In many cases the shape is made from a single line that doesn’t cross over itself. Some of the more famous ones depict a hummingbird, a spider and a heron. All totaled there are nearly 100 shapes that represent animals, figures and geometric shapes. These figures are several hundred feet in length, the heron being over 900 feet. How did a culture make the shapes with such precision and what were they made for? Some believe they’re an astronomical calendar that align with the stars. Others believe they were ceremonial. And even some others believe they were left by or perhaps are guide markers for aliens.

To get acquainted with the area, Josh heads out for a fun filled ride through the desert. The fact there is a lot of sand and dunes means it’s a good place to take a dune buggy and have some fun. And there’s even a little time for some sand boarding down the dunes.

After getting a lay of the land, it’s time to figure out how the glyphs were made. Obviously they’re massive in scale, so could they have been done freehand? After a quick exercise of Josh trying to replicate one, all signs point to no. Something this large wasn’t just put together without some sort of plan. So does this point to the alien theory? Not quite. Josh meets up with a group of researches who have a more down to earth explanation.

The desert isn’t completely flat. There are in fact some rises throughout. Standing on this rise you can get a good view of the surrounding area. Using this, a surveyor would instruct his crew to lay out stakes to represent the major shape. Then using string, they would be able to fill in other parts of the drawing. It would then be a matter of connecting the dots and creating the shape. Josh decides to give it a go and together they make an extremely good replica of the hummingbird. Their shape is much smaller of course, but the theory is sound. It also rules out the alien theory.

And what do the symbols mean? Well, some have been tracked to align with celestial bodies. The hummingbird points to the position of the sun during the summer solstice. The beak of the heron points to the sun at the winter solstice. This would allow the Nazca to know when the winter and summer months were coming so they could plan their crops. This theory only represents a few of the figures.

Josh then heads to the Cahuachi Temple which is the only building left from the Nazca civilization. Out here, there is a very interesting burial ground where bodies have been preserved and even mummified. They were buried with food and offerings. This shows a society that had ritualized burials.

Additionally, Josh talks with some of the descendants of the Nazca who show him some of their ceremonies. Like other cultures, they used local plants to create a hallucinogenic drink that would allow them to communicate with the spirit world. This also shows an organized religious structure and also helps to support that the animals they drew were part of their religious icons.

Next, Josh hops in a plane so he can get a much wider view of the Nazca lines. He’s also off to see these new lines which have recently been discovered after a sandstorm brought them to the surface. It is believed the new lines are actually from the Paracas people and are in fact older than the Nazca lines.

The Paracas lived before the Nazca and were actually invaded by them. The Nazca took over the culture and absorbed a lot of their traditions, including making the lines. The Paracas also had a practice of elongating the head which they reserved for royalty. It’s a very strange practice to be sure and it’s not entirely understood as to why.

While most of the Nazca lines are best seen from above in a plane, some are better observed from the water. Even in this desert there is quite a bit of water and in fact fishing. Josh heads out to find one of the new symbols they call the Candelabra, but is more like a cactus of the area. It is believed this symbol would have been used to mark the location of water. The Nazca would have to learn the art of fishing and water management in order to survive out in the desert and many feel the symbols point to water sources.

To get more information on that, Josh heads out into the desert to discover what exists at the intersection of several of the prominent lines. On the way they discover a necropolis where human remains are literally lying in the sand. In fact, Josh is able to bring up a human skull that sits in the sand. A little further down they discover a pyramid that overlooks the symbols. It is believed this would have been a place of worship and it is also believed that many of the symbols outline the path of water sources.

Water sources in the lifeless desert?  Surely you jest. But taking up the challenge and a shovel, Josh starts to dig down. Oddly, there are plenty of roots, so clearly something used to grow here. And oddly, as he keep going, he begins to pull up wet sand. Yes indeed, there is water in the desert and the idea the Nazca mapped it out seems extremely likely. And to further explore the idea, Josh shows some aqueducts that have been built that channel and funnel the water so it can be used.

When all is said and done, it looks like the glyphs have multiple purposes and uses. They are indeed religious icons that symbolized the religious aspect of the Nazca. They also represent a way to determine a change in the season. And finally, they most likely point to sources of water that would have been essential to their survival out in the desert. And all of this without the help from aliens.

It’s a pretty impressive system and a fascinating culture.