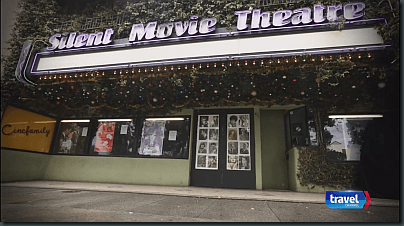 Moving over to Los Angeles, Zak and crew are off to investigate the Silent Movie Theater, opened in 1942 and dedicated to the silent films of Hollywood. It was originally opened by John Hampton and when he died of cancer brought on by the chemicals used in the film preservation process, it was taken over by Lawrence Austin. Sadly, he was later murdered in the theater in what appears to be a murder for hire. Zak would like to make contact with Lawrence or any other actors who’s energy is stored with the film canisters.

Zak immediately refers to the theater as a portal. And when in the storage areas, refers to the stored energy of all the actors and patrons associated with the films. As they start, audio operator Mike says he saw something in the corner and they get the word, "yes" when asked if someone was there. This is coupled with a heat signature of what they believe is someone sitting in the front row chair, the chair where Lawrence Austin would sit.

To follow up on this, they bring in psychics Michael and Marti Parry, to help make contact. Michael sits in the same chair where they filmed the heat signature and he confirms he was drawn to it. Michael then says he feels Douglas Fairbanks is close at hand and writes down something to prove it’s him. Zak then feels the need to run. Michael reveals the word "legs" as the message from the other side. Actually, it looks like "Rub Legs", but they ignore the oversight and go with Run since it fits the situation better.

While channeling Douglas, they hear noise anomalies and Marti is hard at work drawing Douglas Fairbanks. We should discount that she was about 10 feet away from Michael as he talks about Douglas. She has earphones in so clearly can’t overhear his prompts on what to draw.

As they get down to business of the investigation, Billy says he feels something on his neck. Zak pulls out the SLS and shows a stick figure on Billy’s shoulder. To Zak, this is "irrefutable proof" they have made contact and believe it to be with Lawrence Austin. Although this brings about a bit of a lull, Zak says he sees the face of someone hovering over the theater.

Billy heads to the projection room with the paranormal puck and gets "Larry" and "Memories". As he reads the newspaper article about the shooting, there is a sound which they believe is something being thrown. It not something coming off the wall, or rolling off a desk, or a noise associated with temperature change. An unseen object in thrown in an unseen direction for an unseen reason.

They return to the theater and Zak sees a ball of light follow him to his seat. We then have the sound of a squeaking seat. After searching, they find the seat in question and with the slightest touch, it makes the same sound. However, as Zak brings out the SLS camera, there is a stick figure anomaly reaching out to the same space.

To try and make contact, they go to where Lawrence was killed, but think they might be talking to John Hampton. This sends Billy upstairs to where John lived. Billy feels he gets the words, "help me" on the recorder.

The "portal" of the Silent Movie Theater is able to produce a squeaky chair, a dust particle, and the portrait of Douglas Fairbanks drawn by a woman sitting in the same room as someone calling out the name of Douglas Fairbanks. To add to this they hear something fall off a desk in the projection room and get irrefutable proof of a stick figure on a hacked up Xbox connect. Yes indeed, the Silent Movie Theater is a portal.

As least Zak didn’t say it was infested with dark energy.