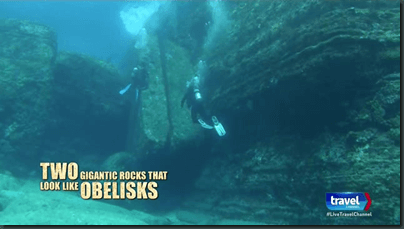 We should all be familiar with the legendary city of Atlantis, with high society and technology that mysteriously disappeared into the ocean. But what if that story was real? It may exist in Japan where Josh investigates what appears to be man made structures including stairs, an altar, grooves for drainage and a carved stone face that have slipped into the ocean.

Many claim this is man made from a defunct civilization while other say they are bizarre, but naturally occurring. Which one is correct?

The city is known as the Yonaguni ruins, huge rock formations, structures and what looks like an obelisk that most likely broke off during earthquakes and plate shifts. There are 118 active volcanoes in Japan, so it’s certainly possible that a settlement was built too close to the shore and met with an unexpected fate.

Josh meets with the man who first discovered the ruins and goes down to have a look. Sure enough, it looks like there are stairs cut at right angles, a terrace and drainage lines. It’s shockingly impressive, then Josh finds what looks like a carved stone face, complete with eyes, nose and mouth. From that alone, this looks to be man made.

Back on the surface, Josh looks for other structures of similar composition and architecture. He finds tombs made in a similar way with the same type of steps. He winds up finding a man who takes him to see another carved stone face. It looks remarkably close to the one under water. The people of the area believe this is a totem and had ceremonial meaning.

To further support the idea that Yonaguni is a lost city, Josh heads to Okinawa to meet professor Kimora who believes the city was built on the shore and then sank due to earthquakes. The angles used and the cutting style were used by later cultures.

But he needs to find out why this isn’t considered a man made heads to Osaka. In the lab he is shown that the angles used for the stairs and other parts of the city can be made by the force of the ocean. Sandstone, can shear off to form steps and other man made looking shapes. The professor shows Josh an example of what he means and believes that volcanic activity, plate shifts and the force of the current have made an incredible, but natural phenomenon.

It’s then time to try a little science. Josh takes the photos he took of the under water carved face and the stone carved face on the island and creates a 3D rendering. With the debris all cleared away it gives a better idea that while the stones have features we want to identify as a face, they do not appear to have been made by tools. And when compared side by side and even overlayed, they do not have many similar characteristics, as in not made by the same group and most likely not man made at all.

So what do we have? At first glance, it looks like a fantastic set of carved structures that have toppled into the ocean with the civilization either scattering or blending into other regions of the area. We have carvings and features that look to be the work of tools. It looks like we even have totems of cultural or religious significance.

On the other hand, we have formations that may have been made through the constant change of the landscape through earthquakes and plate shifts. It’s even pointed out that a whole new island was recently formed through this process. It also possible the constant flow of the current has broken the sandstone creating perfectly normal but deceiving angles. And while we want to see faces carved in stone, this may be erosion.

Do we have an answer? Man made seems more plausible than random works of nature, but then again, nature works in mysterious ways.

One Response to Expedition Unknown – The Japanese Atlantis – S02E09