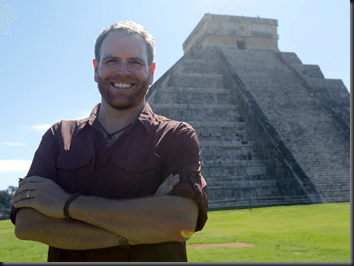 For this episode, Josh heads down Mexico way to try and undercover some truth about the Mayan Empire and why the civilization simply vanished. You remember the Mayans right? They had that wacky calendar that said we were all going to be obliterated and wiped off the face of the earth in 2012. Well, jokes on them. We’re all still here. The same can’t be said for the Mayan culture itself though. Looks like they were wrong about our demise and their own.

But new evidence has been brought to light which may answer some questions. At the height of the Mayan Empire there were over 4000 cities with a population of over 20 million people. They thrived and were masters of math, astronomy and the land. But then suddenly, they disappeared. Josh heads down to Cancun to get things started.

Before we go anywhere we must contend with a lost bag that has decided to take a side trip to Washington DC. Additionally, we must visit the exciting Dia de los Muertos festival. The people of Mexico embrace the idea of the afterlife and spirit world in quite a festive style. Not to be left out, Josh goes with some decorative face painting and blends in with the crowd. Good thing this didn’t turn into a Mardi Gras style event.

As Josh heads out to the ruins and makes his way into the thick jungles, climbs the pyramids and looks out into the thick undergrowth, there is something missing. Where is the water? What did the Mayans use for drinking and watering their crops? We know corn was a pivotal ingredient, but how did they grow it. Turns out the Mayan cities sit on top of thousands of water filled caverns called "cenote".

Josh is given the opportunity to head down into these caves which have been formed and eroded by rainfall. The clear water caverns are connected by thousand of miles worth of tunnels. It is also believed that these caverns were considered a place of supernatural power where demons and gods lived. This was the entrance to the Underworld itself. In order to keep the gods happy, the Mayans would perform sacrifices to show their devotion. This would include blood sacrifice as well as throwing offerings into the cenote. Strangely, this offering would many times be children. Is it really a good idea to throw people into your own water supply?

We can see evidence of their presence in the underworld by the pottery they left behind. This also means the water level would have been lower during that time.

Josh then heads to Chichen Itza, which has some of the best preserved Mayan structures. The city covers 1000 acres, has ball courts which seem pivotal to the Mayan people as well as sacrificial alters and temples. It is believed the city was built and designed to worship Chaac, the god of rain. The huge city sits on top of a network of cenote. Because of their skill with astronomy, it has been believed the cities were placed in line with the sun, moon and planets. But it is now believed water was equally, if not more important and dictated where the city would be placed.

One of the cenote, Holtun Cenote, has a small opening they can climb through so Josh and his guide head down. Turns out this small opening is actually a doorway to massive cavern. It also appears this cenote has some astrological significance as every May 23, the sun shines directly into the cavern and can illuminate the whole area. This would also line up with the pyramid itself which doesn’t appear to be any sort of coincidence.

As they venture down into the watery depths, they find quite a few items of pottery. But it’s the bones and skulls that really stir things up. Clearly people came down here on a regular basis. These items didn’t wash up here, but were placed by hand. They also discover a "shelf" that has human and animal remains lined up. This appears to be a sacrificial alter. Since people were obviously able to walk to these locations the water level would have been receding. This points to a severe and lasting drought for the Mayans. These sacrifices were an attempt to bring back the rain. Without the rain, the crops would wither and die and people would starve and die of thirst.

It appears the Mayans kept cutting into the forest to expand their empire and clear a places for crops. As they removed more and more of the trees, the rainfall dwindled. As the rain dwindled so did the people. The success and expanse of the Mayan people appear to have been it’s downfall. They were destroying the very thing they needed in order to survive. So as they build more and more, they ended up with less and less. It also seems that throwing bodies into the water and letting them rot didn’t do much good for the sanitation conditions.

As Josh says, perhaps we should look at this as a cautionary tale. We need to strike a balance. As we continue to use up our resources we will soon be at the point where we don’t have enough to sustain ourselves. And as always, this was a fascinating look at the people and culture of our neighbors.