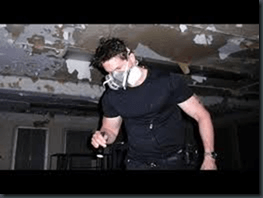 The Yuma Territorial Prison had a brief but sordid existence. It opened in 1876, but only operated until 1909. It goes it’s reputation as the Hellhole Prison due to the extreme heat of the area and poor treatment of inmates.  During it’s run, it housed prisoners in some pretty grim surroundings, most notably the Dark Cell, a hole cut into the side of the granite hill, where prisoners would be chained in a small cage about 5 feet high. It would be unsettlingly dark and it’s rumored the guards would drop snakes and scorpions on prisoners.

During it’s run as a prison, 111 people died from snake bites, tuberculosis, suicide and a prison riot. The bodies are buried behind the prison in unmarked graves. There is a plaque listing their names, but nothing identifies the remains themselves.

Some of the reports of the paranormal include shadows, crying and feelings of sadness. There is even a pictures from the 40s that shows a supposed apparition next to the prison walls.

As the investigation starts, Zak meets with a woman who wants to share her experience. She claims she felt a presence and had her hand pushed by a prisoner she believes to be John Ryan. She felt his sadness as she tried to communicate with him.

They start off with the SLS camera on the cells. They aren’t able to detect anything, but they do hear a scream. No source for the scream, but they are out in the open and sounds will echo and travel from anywhere. During their EVP session, they easily hear a train in the distance.

Next, they split up with Zak hanging out in the cell of John Ryan and Aaron off to the courtyard. Zak hears a loud bang while he is alone in the dark. Out in the courtyard, Aaron feels someone touch his back, begins to feel ill and Zak sees an orb of light during these feelings.

Of course, we must pay a visit to the Dark Cell, where Zak feels something touch him on the hand and hears footsteps. He also claims to hear someone knocking as well as something grunting at him.

Back at the command center, they pick up what sounds like saloon style piano music. Also, one of their panel lights begins to pulse. This leads them over to a museum display case and the Yuma prison band. Just behind this, is a stage where the SLS camera shows figures dancing and playing on stage. Zak and team are firmly convinced this is the prison band showing off for them.

There are quite a few interesting things about this episode. So much is made about how bad the Dark Cell is, yet the tour guide is utterly unphased by it. As Zak is nearly soils his knickers over the bats, the tour is guide is calm and says to hold out his hand so they can land.

The entire segment with Patricia Lynn Cody comes across as complete nonsense. It’s amazing how people are terrified to go somewhere until there’s a camera. And what about her story is so terrifying? We also have the garbled EVP so Billy and Zak create an elaborate story so it makes sense.

The photo they show from the 40s is dubious at best. We’ve seen way too many fake photos from that era.

Then for the end, we have the flashing panel light, "which has never done that before!" But it’s the wild story the convince themselves is real about how they were drawn to the picture of the band and then to the hall that’s really questionable. That is truly fitting piece together that support your claim.

Everything in this episode is laughable. The investigation is a dead end where they don’t capture any evidence, but instead of going with that, they make up outrageous stories and try to weave things together to make it seem like the place has energy. Zak is even trying to spin the demon angle with some of the questions he asks. You can tell it’s bullshit when they spend time airing footage of someone walking around outside by the prison cemetery.

And you can say and believe whatever you like about the band playing on stage. Hacking the crap out of an Xbox Kinect and claiming it to be a device to see the paranormal doesn’t make it so.

This is clearly an old prison that did some bad deeds, got a bad reputation and now people are just running wild with the stories. This episode was laughable and shows people will claim a haunting even when nothing happens.