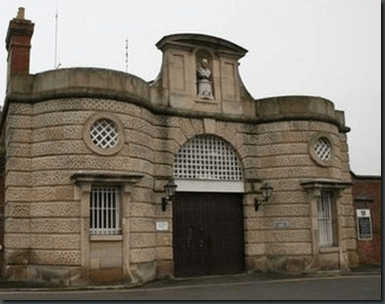 For the next outing of Paranormal Lockdown, it’s off to Shropshire, England to visit the Shrewsbury Prison. Established in 1793, it doubled it’s original capacity and was the site of numerous public hangings with bodies buried in unmarked graves. Some of the hardened criminals were those who failed to pay their taxes and stole bread. The prison closed in 2013 and is now a tourist attraction. Some of those tourists feel they hear cries and feel the hangman’s noose around their necks.

Katrina and Nick meet with Steve, a former prison guard turned tour guide. As we start  the tour, Katrina admits that prisons freak her out and make her uncomfortable. Steve begins to tell stories about his time there, when there is a loud bang from one of the cells doors. This is quickly followed by another. Steve doesn’t pay much attention and says it happens all the time.

They enter cell 441, where Katrina says she feels a heaviness in her chest. Steve confirms there was a suicide in the cell. He further explains that C Wing is for the women and several people claim to see a woman walking to the hanging room. When they enter that room, there is a noose hanging down and Steve states a little boy commented about the bad man in the corner which no one else could see. As Steve talks, Katrina says she has a pain in her neck and shoulder, alluding to being hanged.

For night one, Katrina says she sees a shadow figure down by their equipment. There is another loud bang as Nick tries to get the spirits to follow him into the hanging room. This doesn’t produce results, but a few minutes later, Katrina takes a tumble down the stairs. Nick tries to put forth the idea that Katrina was pushed, but she shrugs this off.

As the night comes to an end, Nick puts out his recorder and in the morning claims there is a voice saying, "Nick! Get up!"

For night two, Katrina starts off with another tumble as she enters the cell. Katrina may think the prison is trying to kill her, but wandering around in the dark has it’s dangers.

Nick heads down to the tunnels while Katrina is on the first floor in A Block. There is another loud bang and a crash. As Nick is setting up to record the area, they hear footsteps.

For day three, Nick brings out the Geobox and heads for a cell. He hears pops and cracks come through and takes these to mean words. As he stands outside the cell, there is the sound of another door closing. Nick feels this is leading him to the hanging room. Once there, he feels pain in his neck and shoulders, the same as Katrina did. But this time we are treated to a swinging noose.

For the final night, it’s back to the hanging room to unravel the mysteries of the swinging rope. Almost immediately, Katrina feels something tug at her back. In the video replay it looks like a bunched up section of her jacket comes free.

Nick brings out a 3D mapping program and discovers there is a figure close to Katrina. In response, Katrina says that area feels cold. Soon, it appears the little stick figure is reaching out for Katrina’s hand. This setup looks quite similar, although more detailed, than the hacked up Kinect camera that Zak uses.

Of course, it would have been better if Nick hadn’t said anything and then judged if Katrina felt anything. As it stands, he’s clearly leading her.

What sort of evidence does this give us? We have a lot of bangs in a 200 year old prison. Not really a shocker. Further, every sound, bang, and door slam happens way out of camera shot so it’s hard to get excited over that. Sound clearly carries in a place like that so who knows if it was even a door.

There is nothing paranormal about Katrina falling, even if Nick is trying to float she was pushed.

The voices Nick claims to hear sound like pops, clicks and buzzes that don’t even remotely sound like words.

For the big evidence, we have a swinging rope. While super cool and exciting, the camera is positioned so the top beam is just out of frame. The rope doesn’t swing in a natural way. It jumps from the spot we can’t see, not from the noose as if to simulate a hanging.

There is no doubt the prison is extremely impressive and no doubt lives were lost under some dreadful conditions. But do Nick and Katrina have solid evidence of a haunting? Evidence that is tangible and not "I think I saw something"? And not the sound of bangs in an extremely old building?