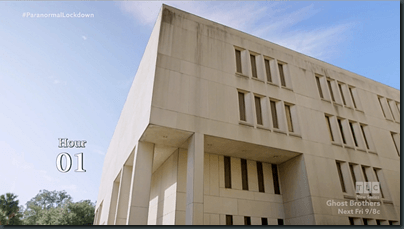 Nick and Katrina are in Savannah to visit the Old Chatham County Jail, built in 1972, and it’s claims of the paranormal. Visitors say they hear footsteps and disembodied voices. Others claim to see an apparition on the 3rd floor. While not a paranormal event, Carl Isaacs Jr was held at the jail for the murder of 6 people. Some believe it could be his evil energy lurking in the halls. And this story adds to the sinister mystique to help sell the lore.

They meet with Rusty Smith, a corrections officer at the jail for two years. He’s heard footsteps and felt like someone was watching him. Those are hardly claims of the paranormal, but rather your imagination running away with you. Almost to prove this, Katrina completely misses the mark when she says she feels sick in the small cell. When asked if anyone else has that experience, it’s a flat no. Katrina floats the idea again with investigator Ryan Dunn and shot down again.

In essence we have people hearing footsteps in an old, echoing building in a busy section of the city.

For Day 1 they head to the 4th floor and hear what they think are footsteps. This is followed by a couple of taps. But instead of looking for the source on the 4th floor, they go several hundred feet away and end up on the 3rd floor. This proves sounds are echoing and can come from anywhere, including outside.

Next, they get a voice saying, "You wanna go that way" and then "fifteen." This means to go down the hall to cell. However, they’re sitting in cell 6, not 15, so what’s the story there?

To end the day, Nick will sleep in the hallway on the third floor and Katrina on the first floor. Nick hears several bangs before going to sleep and a bump in the middle of the night. It’s hard to imagine this is something other than the building settling during the cooler temps of the night.

On Day 2, nothing actually happens. They are ready with all sorts of equipment, but all they gather are the thuds of an old building.

For the final day, they head upstairs again and stumble on the records room. Katrina is excited to get some background so she can make the evidence point to a particular person. They want the noises to be paranormal, so they look for someone who died and go with a suicide.

On the 3rd floor, the Geobox comes out with. "Get me out of this. I don’t want to stay here." Rob then hears a whisper and when he looks back over the footage, they make the wild claim a figure is peeking out of the doorway. How they see a figure is anyone’s guess. A clear case of seeing what you want to see.

When all is said and done, this investigation is trying to make something out of nothing. Prisons make a great paranormal trap because of the creepy vibe and sinister occupants. But, the claims are of perfectly normal behavior. Groans, creaks and thuds are not examples of paranormal activity.