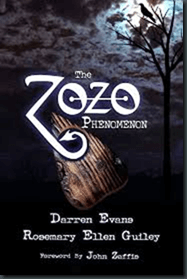 After purchasing the Demon of Brownsville Rd, Amazon recommended The Zozo Phenomenon by Darren Evans. And after seeing Darren resurface in the Samaritan Cult House episode of Ghost Adventures I decided to investigate further.

The book was actually completed in the early part of 2016 and chronicles Darren’s personal experiences with the Ouija and Zozo, his research, and letters from others who have been visited by Zozo when using the Ouija.

Things start with Darren finding a Ouija board with the word Zozo written where Ouija should have been. This was in the crawlspace of a girlfriend’s house with the board surrounded by 4 blackbirds. It should also be noted that Zozo also means blackbird in the Basque language.

Since his girlfriend’s parents claimed their house was haunted by a spirit named Leonard, they decide to make contact with him. Tara, the mother of the girlfriend, was a self-professed Wiccan and collected items of the occult. Joe, the father, warned them not to toy with the board. However, the temptation was too much to resist and they are soon talking with Leonard.

Darren becomes obsessed with the Ouija, contacting spirits on a regular basis. But as time goes by, some dark events are visited on Darren. Darren learns that he will be killed during a stabbing. The spirits say his friend is going to be murdered. Some time later, his friend Randy sinks into a massive depression and kills himself.

After another traumatic incident, Darren tries to burn the board. But in their bungling, the gas can is left to close and his friend Michael catches on fire.

The board is actually destroyed when Darren puts it in the trunk of an abandoned car and it’s eaten by a horde of rats. This explains why there is no evidence of this board.

Years later, he meets up with Michael and they give the board another chance. Michael asks how he will die and Murder is spelled. A few months later, Michael is found dead from poisoning and his death remains unsolved. In another twist of fate, Michael’s wife is killed in a car crash.

At this point, multiple people close to Darren have died after using the Ouija or getting information from it. But Darren continues to use the board and believes through the power of Zozo he is able to control a friends dog. However, the dog appears to be consumed by a dark force, becomes uncontrollable and is found several days later with it’s throat eaten out.

As he continues to use the board, Zozo refers to himself as the King of Kings and promises to bestow power. Although that power is just as likely to bite the hand that feeds it.

Darren then strikes out on his own and get the ubiquitous Amityville, "too good to be true" deal on a house, a cheap four bedroom with a basement. When he goes to move in, he finds the previous owner’s furniture is still there because the previous family left suddenly. But even though Darren is in a new place, he is being followed and another series of unfortunate events ensues.

Zozo begins to show it’s darker side and tries to drown his daughter in the bath tub. This isn’t the work of negligence, but spirit activity. Zozo supposedly makes another attack on his daughter when he sends her to the hospital with a raging fever that turns her "tongue to stone." Ironically, this was the name of a band that Zozo suggested to Darren and when mocked over the choice, Zozo takes revenge. There is also the death of his uncle Tom and reports that a body is buried under the front porch of the house.

Also during this time, the original warning of Darren dying by stabbing comes to fruition as he is attacked by his girlfriend and savagely wounded.

By this stage Darren comes forward with his story that leads to an interview with Darkness Radio. This leads to his appearance on Ghost Adventures where his girlfriend at the time had several negative encounters with Zozo and his participation in the movie "I am Zozo". He uses these mediums to warn people of the dangers of Zozo and what they might encounter. Thus the legend of Zozo is born.

This leads to the middle portion of the book, a compilation of dozens of letters sent in from people recounting negative experiences with Zozo. The stories range from having nightmares to physical attacks to dire warning about the future.

For the last portion, we have some research in to Zozo. It can be known by a variety of names such as Mama, Zaza, Lilly, Zach, Zo, Oz and pretty much any other name you might come across. It is a trickster spirit or perhaps even a Djinn, that starts off with helpful information, but then slowly let’s it’s dark side be seen. Even referencing itself as Zozo, it has chosen one of the darker letters of the alphabet as Z is sometimes referred to as the lost letter.

There is even some doubt as to the gender associated with Zozo. It is believed to be male by it’s use of sexual overtures toward women. However, it chooses Mama and Lily for it’s name, clearly feminine.

In the early days, it seems Darren may been one of the few (if the only one) who encountered Zozo, but now claims of this spirit reaching Ouija boards is on the rise. It has now reached a fever pitch (hysteria) with Zozo encounters becoming common place and even YouTube videos documenting the experience.

However, the Ouija still remains a toy distributed by Hasbro and they will gladly ride the coattails of this phenomenon by releasing a few moves with the Ouija at the heart of the action. There are even reports of some boards being produced without a "Z" so Zozo can’t be contacted.