The last Ghost Adventures episode, Exorcism in Erie, come across as very staged and false, especially the claim of residue on the stairs leading to the basement where Bishop Bryan performed his mini-exorcism on the horseshoe.

At the end, they claimed there was some foreign substance on the wall. They claimed it was wet and even looked like blood, perhaps even some sort of demonic residue left behind by the entity supposedly taking possession of Chris.

Even in the dim light, it very much looked like plaster spackle and it only took a few seconds to find an image of a wall being repaired that looked almost identical to the material on the wall in this episode.

When you compare the two, it’s pink drywall spackle. Zak, Aaron, Bishop Bryan and the owners are deliberately staging evidence to suggest an outcome. Had they turned the lights on, the deception would have been exposed.

So if they faked the foreign material on the wall, what else did they fake? What other props are they planting around the house? A lot of their previous discoveries and evidence have been dubious, but it looks like they may have been caught out on this one.

It seems clear that the demonic presence, the exorcism, the story of the witch’s house and the dark energy around a rusty bit of metal are a complete fabrication and hoax to try and sell their idea of demonic.

The image on the left is from Ghost Adventures where they claim it’s blood or foreign matter. On the right is pink drywall spakcle on the same sort of textured wall. Look at that, they’re the same. This is not a case of getting something wrong, this is a case of fakery.

The drywall image was taken from here – https://operationhomeblog.com/tag/spackle/ 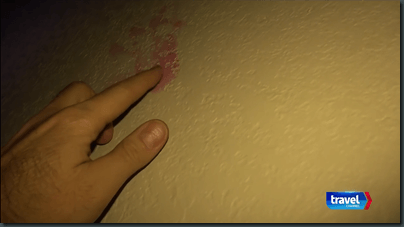 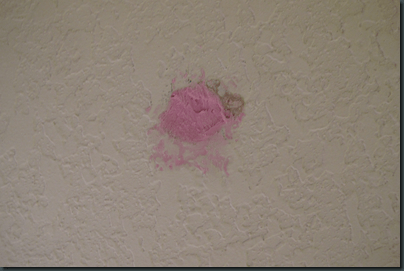