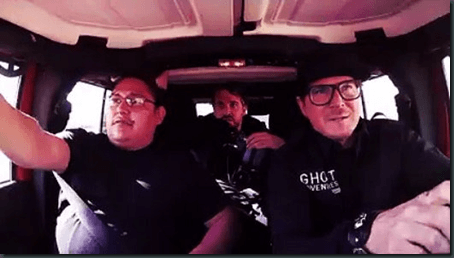 After taking a break from their dubious exorcism in Erie, Zak and the team are off to the four corners area, into Skinwalker Canyon. The four corners is the intersection of Arizona, Colorado, New Mexico, and Utah. Zak calls this the Bermuda Triangle of paranormal events, something I’ve never heard anyone else say. Although the Skinwalker has been the subject of X-Files and Supernatural episodes.

The focus of their investigation is the Skinwalker, a creature said to shape shift from coyote to demonic humanlike form. It’s the result of conjuring within the witchcraft caves on the Reservation.

The Native Americans believe strongly in the creature and a man suspected of being a Skinwalker was recently killed by having his head cut off. He was suspected by his wife so she took matters into her own hands. Take that for what it’s worth.

Talking about the creature is frowned on because those that relay the story of the Skinwalker can be the victim of a curse.

At the entrance, Randy says he has seen the Skinwalker in the canyon and Vincent, their guide and tracker, has brought along a rifle for protection. In the witchcraft caves they find new tracks on the inside of the cave that don’t have corresponding tracks on the outside.

Inside, they find an archway, which Zak says is a portal to another dimension. This is confirmed in his mind when Vincent and Aaron don’t hear him calling for them. When they do appear an hour later, they’re dazed and confused. Or so Zak says.

After their little recon mission, they run into a medicine woman, Walking Thunder, who says they need protection. This involves a small little ceremony wherein they eat a bit of the Devil’s Weed, a hallucinogenic and the whole team is trippin’ balls. At this point, everything they do, say, and see is more suspect than normal.

And so they return to the witchcraft cave and what do they find? Evidence of the demonic in the form of a small, burnt out fire with an animal skull in the ashes. This is no way should be taken as someone camping and having dinner.

Inside, Zak sees three burn marks on the cave wall which he says are definitely demonic. I wasn’t aware torch marks could be labeled as demonic. And since the little community knew they were out there, far be it for anyone to mess with them.

Even more shocking is a feather against the wall and a bullet casing. From Zak’s point of view, these are all signs something terrible has happened.

And what better way to deal with that than to split up. As usual, Aaron sets off on his own to visit the portal. In his doped up state of hysteria, he hears the sound of a woman.

Billy and Zak head out across the plains to look for Skinwalkers. They have no idea where they’re going and just start driving around. When they stop, Zak makes a note that it smells like dead flesh and that he sees eyes in the distance with his binoculars. But just because it looks like a coyote doesn’t mean it’s not a Skinwalker.

Meanwhile, Aaron is pretty much losing his mind with all the sounds of the coyotes in the area. After they’ve amped things up with Indian Drum Chants, Aaron says he’s about to black out. Jay decides he should use scrying near the portal. During this they see a flash, the broken temperature gauge goes from 50 degrees to 90 and Aaron says something touched him.

Back on the plains, Zak is jumping at shadows, literally. He says some dark figure envelopes Billy. This coincides with a screech, so the coyote has changed from animal to human form. While they continue to wander around in the dark, Zak and Billy feel a vibration and capture a light anomaly falling down the rock face.

To Zak, all of this is proof of the Skinwalkers and has nothing to do with them taking a hallucinogenic weed and wandering around in a canyon where noise vibrates off every surface and they can hear things from hundreds of feet away.