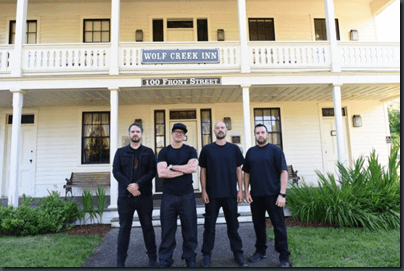 Leaving Missouri, Zak and team head to Oregon, to investigate the Wolf Creek Inn, where a legendary vampire entity roams the woods. There are several reports of murders, which may be attributed to this creature.

As Zak talks with Mark and Margaret, they hear footsteps above them. Their daughter Marcy, claims to have seen and heard a female spirit and even shows a blurred photo of her. These events draw them to a back hallway, which Margaret says has negativity associated with it. Zak quickly claims this hallway is a portal and the little girl is a demonic entity. This is proven when he gets a case of hives brought on by evil forces.

While discussing the history of the house and the dark events, Jay makes an absurd comment that a Native American was hanged to "christen" the house. Paranormal investigator, Madonna, confirms this was Native American land and feels there is a trickster entity lurking around.

Keeping with the usual trend, as they start the investigation, Zak sees a light anomaly, which he thinks is a girl’s hand reaching out. As he moves upstairs, he claims to see a dark entity and feel a cold spot. For an instant, the SLS camera picks up the usual stick figure, but nothing further. And is the habit, Billy says he feels dizzy and something is up there with them.

Downstairs, Aaron says there is an energy around him. Zak feels another cold spot and again says he sees a hand reaching out. In this same space, Billy says something is coming up on him, and Zak confirms this with a thermal imaging blob, that looks like a reflection, behind Billy.

After regrouping, Billy and Aaron head upstairs to the supposed portal and make a "mind blowing discovery." This turns out to be plastic drink tops that have fallen off the shelf, causing a loud bang. And it’s easy to see why they fell, as the shelves are all leaning forward at a noticeable angle.

For the final part, they will split up to see if the plastic top throwing entity of darkness will prey upon them individually. Aaron goes outside to lure the vampire entity. Billy goes to the parlor to use the Talking EVP. Zak goes upstairs where Margaret said she felt they weren’t alone.

It’s no surprise that Billy gets nothing. And no shocker that Zak sees yet another light anomaly and feels a cold spot. And of course, Aaron gets a headache, admits he is scared out of his mind and begins to behave as though he’s in a trance. In fact, he’s so out of it, he drops his camera-a sure sign he’s being manipulated.

With all of the dark entities that were never seen, and all the cold spots that were never recorded, and the objects falling off a leaning shelf, Zak believes they have documented a dark energy that can move objects, mimic other entities and psychologically effect the human mind.

And you also have to ask yourself, just how many demonic portals are out there?