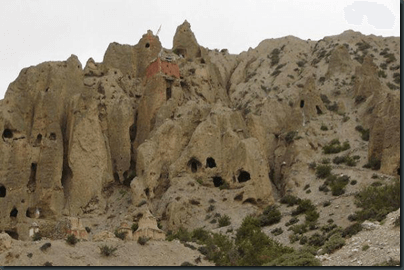 As we get to the end of Josh’s travels for the season, we’re off to Nepal in search of the famed Shangri-La. The term has come to represent a paradise, a mythical city of Utopia where people don’t seem to age, suffer from disease and the idea of war doesn’t exist. But is such a place merely the imaginings of a fiction writer or can there be such a place?

At first, as Josh meets with some monks, it appears Shangri-La may be another word for Shambala, which might not be a place you visit with your mortal body. It is more of a state of being, a state of consciousness achieved through meditation.

But there may be more to it as Josh is told of the Sky Caves in the Mustang Valley. Hundreds of caves have been carved into the rock walls and they are almost completely unexplored. However, there is a small fuel crisis to overcome and nothing says skirting the law like black market fuel and a helicopter.

With that problem solved, they meet with Mark Aldenderfer who has been studying the area for years. He believes there are around 10,000 cave openings and they have perhaps been able to explore 300 of them. Not only do they not have the resources to explore every  one of them, but each opening is over 50 feet off the ground. You don’t merely walk into one, you climb using rope and harness. So they’ve been able to locate the caves, but they are still undiscovered.

For the caves they are able to enter, Mark takes Josh into a monastery carved into the rocks. It’s complete with mummified snow leopards, hand carved statues and paintings. It’s an extremely intricate temple that very few have ever been able to see.

The next stop is the small village of Chhoser, where Mark is able to secure some supplies and some additional workers. The supplies are a couple of ladders which they strap to the trucks and do their best to climb the steep, icy and crumbling paths they call roads.

At their destination, they lash the ladders together and make their way inside another set of caves. What they discover are walls covered in detailed paintings. The art is most likely 500 years old, but since it’s painted right onto the unstable sandstone, entire murals have slid off and turned to dust. Interestingly, some of the locals have seen identical paintings in temples hundreds of miles away. It would seem the people moved from location to location meditating and creating works of art on the walls.

As Josh says, it’s disappointing to know that within a hundred years, those paintings may be nothing more than dust on the floor, the messages and signs of the artists to disappear.

But is this Shangri-La? Is this the Utopia of legend? Perhaps not, but it does speak to the ideal of peace of meditation. In this type of seclusion, one could find harmony with the world. However, there is another stop on the journey that may be closer to a Utopia.