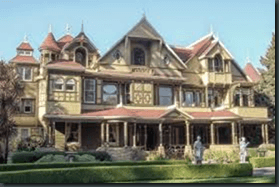 For their next outing, Zak and team return to visit the Winchester Mystery House, a location they visited in 2011. The Winchester House is certainly an odd mansion with more legends than you can shake a stick it. It’s a massive 160 rooms, covering 24,000 square feet, with ceilings that are too low, floors that tilt at odd angles, doors that open to nowhere and stairs that dead end into walls. To be sure, it’s a carnival fun house that some claim to be haunted. However, it doesn’t take much research to find that so many of claims against the house are shrouded in hearsay and urban legend. Even the famed story of the house being under continuous construction isn’t true.

But this sort of thing won’t stop Zak, and like before, he is not only firmly convinced the house is haunted but contains demonic energy and a portal to another plane. To further his point, he says "we’re not welcome here".

While talking with the tour guides they get "stories" about the Wheelbarrow Man and other things he "thinks" he might have seen. John claims to have seen a figure, but when shown footage of something in front of the lights while Zak was looking around, he swears it’s absolutely the same figure he saw. Certainly changed his tune of thinking he saw something. The other stories that come in also start with, "I believe I saw" and "there is a story about".

From there we start the investigation in the seance room. Or at least that’s what Zak is going to call it. There is nothing to suggest seances were held in this room. But Sarah Winchester was fairly taken with the spirit world, so we’ll go ahead and agree that it’s likely.

Right as they start, a stick figure appears on the SLS. Zak has Billy sit on it, which he declares to be cold. They get the name Russell and it responds, "of course" when asked if seances took place in that room.

Not to be outdone, Zak takes one of the Winchester rifles and heads to the same room. Right after he cocks and aims the rifle, the SLS and thermal cameras lock up. They of course believe this to be the work of spirits.

As the night goes on, they hear doorknobs turning and claim to get a hand waving to them. This hand appears next to one of the mirrors that deceives you about which way the stairs actually turn.

Down in the basement, Aaron and Billy claim to hear groans and Aaron has something fly past his ear. They determine this to be another light orb. On another level, Zak begins to feel dizzy, which isn’t surprising considering the disorienting nature of all the angles. But also claims to see a child walking the corridors.

They admittedly get all turned around in the house and find themselves at Sarah Winchester’s room. They try to make contact, but receive no reply. As they continue working their way through the house, Zak feels he is pushed down the uneven and twisting stairs. Zak swears he didn’t trip and that the house contains a crossroads of energy. He again claims to see a child roaming around.

While Zak may claim the house contains a portal, let’s just take a moment and check a couple of things. The information about the house starts with, "the story goes", which is the same as, "legend has it". The historical details about the house itself have been woefully distorted. It’s a tourist attraction, so do you really think anyone is going to say, "yeah, it’s a dud", although that is exactly what happened when the Ghost Hunters looked the place over. Not that those guys should be trusted, but it’s interesting to note the completely different opinion. But they bring up a good point, all the odd angles and disorienting feeling bring on the "funhouse effect". That explanation makes more sense than anything Zak is throwing out.

You have an old house. You have legends tied to a gun manufacturer. You have a legend about a medium and the ghosts of the rifle victims. You then add the fact that the house is a labyrinth with a design that makes no sense and of course your going to get all sorts of stories about it. However, nothing they’ve come up with really shows the house to be haunted. It’s certainly bizarre, but that seems to be the outcropping of an owner who might have been suffering from her own mental disorders.