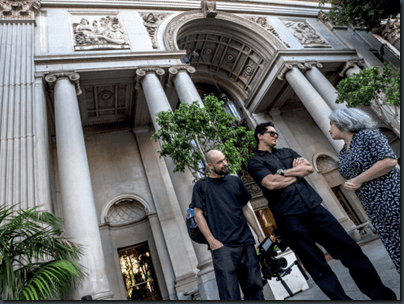 To kick off the new season, Zak and the gang delve into the mystery of the Black Dahlia and head to the location where the murder of Elizabeth Short may have taken place. They’re at the home of George Hodel, suspected murderer of Elizabeth and a doctor who may be linked to other murders.

As a quick recap, Elizabeth Short was murdered, disfigured and then displayed as a public spectacle. There was no true motivation for the murder with no one actually charged for the crime. There were many suspects, Hodel being one of them, but he was never officially charged as he fled the country. Technically, the murder is unsolved although his son Steven Hodel, a police officer, is firmly convinced his father committed the murder of Short as well as other women. He has written books on the subject and currently owns the property believed to be the murder site.

To get a little background, the team visits a couple of locations Elizabeth Short visited in her final days. They visit with Kim Cooper who has researched the Black Dahlia and now gives tours. She takes them to the Figueroa Hotel where she stayed as well as the bus station where some of her personal belongings, including many letters she never posted were kept. These are mentioned as some of the last places Elizabeth was seen.

After literally soaking up some of the energy of the area, they head back to the Hodel house to conduct a seance with Patti Negri and Fauna Hodel. It’s a bit odd that Zak is fine with a seance but it so against the Ouija board. But during the event, Zak asks questions, holds up pictures of George Hodel and has Billy work the computer to try and record responses.

During their conversation the word "malicious" comes up several times as well as the word "penny" which they assume to be the name of someone, perhaps a victim. Amidst the feelings of dark energy, Zak sees a ball of light moving around. Billy also claims to not feel well.

With the seance done, they head down to the basement where a lot of bad energy has been felt. Zak gets quite a scare when he hears a voice in his ear. They also have Billy go down to the basement wearing just an IR camera. This means he’s not looking through the lens and will have to feel his way around. Things turn a bit ugly as he becomes full of aggression and throws some violent outbursts at the George Hodel. A bit out of character for Billy.

The final part of the investigation is to head upstairs to the bathroom area where it is believed  Elizabeth was not only murdered, but dismembered. Her body was actually severed in half and this could be where it happened.

Using the modified Kinect camera, Zak believes he sees someone moving, possibly working on a body and then moving to a sink to wash it’s hands. He feels they are seeing George Hodel carrying out his deeds on another victim.

Unfortunately, they don’t make contact with Elizabeth, nor is there evidence to suggest the energy of George Hodel is within the house. As mentioned, he fled the country, possibly Asia, but his whereabouts is unknown. Interestingly, if you look up George Hodel, some have tried to link him to the Torso Murders and as well as the Zodiac killings. Those might be a bit of a stretch, but George got a pretty nasty reputation if he’s being linked to these other crimes.

I will have to say there were several embarrassingly comical pieces to this investigation. Again, the fact Zak is on board with a seance, but says a piece of cardboard known as the Ouija is a portal to the demonic is annoying. And at that same seance, Patti acts like she’s drunk out of her gourd and Billy has taken up the mantle of saying he feels dark energy and is going to throw up. Not to mention his little outburst down in the basement. Zak says that was caused by Billy touching the (tainted) ground. Pretty hard to buy into that. Sorry, but that felt staged. And finally, Zak coming unglued because of a voice in his ear? Come on, how many times have we seen this now? They all seem to be playing into the "dark energy" pretty handily these days.

Haunted History brings to light a story I was previously unfamiliar with. During the 1930s, America was gripped with the Great Depression. The country as sent into economic collapse and scores of peoples lost their jobs and their homes. Shanty towns popped up where the homeless and the jobless tried to ride out the economic storm. It was in one of these shanty towns in Cleveland that a series of murders known as The Torso Murders took place. The bodies of unrelated victims were emasculated, decapitated, drained of blood and dumped for the police to find. The area was sent into a panic as year after year bodies showed up but no suspect was ever charged with the crimes.

The murders started in 1935 near the B&O Roundhouse in Cleveland. The first body was found by some boys playing baseball. A search of the area yielded another body buried in a very shallow grave. The police were meant to find it. The style of murders coincide with another body that washed up on the shore of the lake a year before. Right off the bad the police have three murders and not a single clue to work with.

After the stunning victory over Al Capone in Chicago, Eliot Ness is brought in to help clean up the police department and solve the series of murders. He immediately clashes with the lead detective Peter Merylo as the two have completely different suspects in mind. Ness feels a doctor, Francis Sweeney is behind the murders, while Merylo believes it’s a railway man doing the crimes. A man of the rail could commit the murders, hop a train and be states away before the body is discovered. He could then drift back into town and commit another series of murders.

The bodies began to stack up and the pressure mounts as both the Great Lakes Exposition and the Republican National Convention are coming to town. In an odd twist, they actually use the Exposition to display castings of the victims faces to try and help identify them. Hundreds of thousands of people walk past real life molds of decapitated victims, but they still remain unknown victims.

In 1938 there are 11 victims and still no suspects. Ness is convinced that Sweeney is the murderer and questions him for weeks at a nearby hotel. Sweeney had an office near the dump sites, he was known to drink to much and become abusive and he was committed to an asylum multiple times. For the questioning they bring in Leonard Keeler, the inventor of the modern day polygraph machine. Keeler says Sweeney is the man, but there is no evidence to link him to the crimes. Days later bodies turn up in the rubble and trash right outside Ness’ police office. In a fit of rage, Ness rounds up all the inhabitants of the shanty takes, takes them away and burns the entire housing development to the ground. The citizens are outraged and through this event Ness has effectively destroyed his career. However, the murders stop.

Merylo isn’t convinced of the doctor’s involvement and in May of 1940, 3 more bodies are found in derelict railway cars. Now Merylo is convinced he was right all along and goes undercover as a hobo to try and ferret out the truth. The police arrest Frank Dolezal who ends up being murdered in his cell. The whole event was staged to look like a suicide. And right after the police get letters from the alleged murder saying he’s moved on to California.

Ironically in 1947 Elizabeth Short (The Black Dahlia) is found death in a similar fashion as the Torso Murders. Did the killer indeed move from Cleveland to California as the letter stated? Either way, no one was ever caught and charged with the murders. It still remains unsolved.

Because of the nature of the crimes there are many claims of the paranormal around the areas where the murders took place. Near the B&O Roadhouse investigators have gotten the recording of "I don’t know" when asked if they knew the murderer. They also hear lots of banging and scratching in the rail cars and feel a presence. In some of the exterior buildings, heavy barrels have been pushed away, forcing the doors to slam shut during investigations. Hearing noises doesn’t seem all that uncommon around old railway cars and a single EVP saying "I don’t know" doesn’t really convince me of a supernatural hotspot. Further, a barrel moving clearly can’t be the work of a prankster or someone trying to scare the hell out of someone.

Additional paranormal investigations take place at a location called Jackass Hill, the location the first body was found. Many people feel a sense of sadness in this area and claim to hear voices.

Another spot of activity is the Great Lakes Brewing Company, where the dark shadow of a female is said to walk around. This could be Flo Polillo, one of the victims. She may be at the Brewing Company because it was a hangout for Eliot Ness. Once liquor was legalized again, he was known to indulge in Scotch. It’s theorized that she keeps going there to ask for his help.

Many investigators see shadows, hear voices and feel a presence in these locations. Is this activity linked with the Torso Murders? Are these the unknown victims trying to reveal messages about their killer? Are they even related to these murders? Nothing conclusive or substantial stands out so we aren’t sure who, if anyone, is actually making contact. What we do know is that multiple people lost their lives in a very brutal manner. Their killer was never caught and may have moved on to other areas to commit the same crimes. These victims may be reaching out, but so far, I don’t think we’ve got the message.