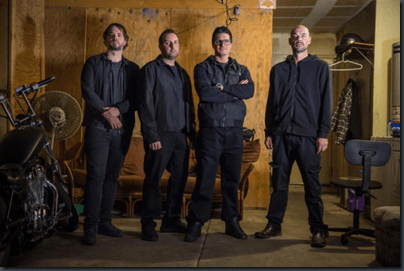 Staying close to home, Zak does an investigation in Las Vegas, where his friend Anthony has come to him stating his mother died in his arms while possessed by a demon. Zak believes Anthony and his family are in a life or death situation and links the nearby crimes of a shooting, a fire and a stabbing to the dark entity that invades the home.

Anthony claims his mother would get sick on her birthday ever since they moved into the house. In the end, she was throwing up gooey black material and claims she made a deal with the aliens-demons.

Anna, Anthony’s on and off girlfriend for 6 years, admits Anthony talks frequently about suicide and that she feels depressed in the house. She also agrees that Anthony has rage and punches walls. The many holes can still be seen as we move from room to room.

And as we go through the house, we find the mother’s room locked with electrical cord wrapped around the door handles. Anthony says a girl in a white dress hides in there.

As the investigation starts, Bishop Bryan Ouellette and Sister Mary, who have been involved in previous (dubious) exorcisms, show up to lend a hand. More of the story unfolds as the sister’s reveal their father was "crazy", killed a cat and two dogs, and was said to perform Satanic rituals in the house. We also find out the mother’s remains are still inside, sitting on a shelf.

With the Satan angle established, Bishop Bryan performs a blessing on Anthony and Anna. This puts Anthony into an agitated state where he starts shaking and can’t feel his hands. On cue, Zak becomes distressed and angry and needs to leave the house. We come back moments later to find Anthony and Anna in tears.

Zak recovers from his outburst, sneaks off and unlocks the mother’s bedroom. Aaron says the energy coming out of there is "intense." This stirs up the whole house so Anthony and Anna are whisked to the safety of the garage.

Bishop Bryan and Sister Mary, sit Anthony down and continue with their blessing. This leads to more grunting, growling, pleads for help, threats of violence and a whole lot of crying.

Zak and Aaron take this opportunity to search through the mother’s room, looking for what might tie the dark entity there. They find a small cabinet with a lock of hair, a common item for a mother to carry, but Zak takes it as a dark totem and cursed item.

Aaron turns on the Spirit Box and gets a female voice. This is followed by "Satan". How he hears any of these voices is a mystery since he is yelling and jumping around with abandon. But As Zak is about to touch a safe, they get the word, "stop".

The SLS camera captures a stick figure in the room, which makes a jerky move toward them. Billy then says he feels like he was punched and has to leave the house. In the garage, he and Anthony both claim to have "stabbing" pains.

The ashes are given a blessing, then removed to Zak’s museum. The house is then given an exorcism. Bryan and Mary, start in the mother’s bedroom and focus on the small cabinet Zak found earlier.

They too are taken aback by the lock of hair and a jar containing something dark and burned at the bottom. This could be residue from the "black stuff" Anthony’s mother expelled before she died.

The final act is to burn what I assume is the hair and some other items from the bedroom cabinet. Additionally, Zak puts the ashes in a display case and puts his crucifix around the box.

As with so many other stories of the "demonic", it’s hard to ignore the many examples of mental illness presented.

And what should be made of the obvious police SUV in the street?