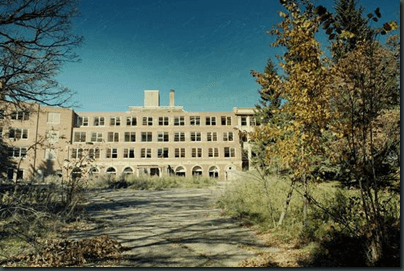 The next destination for Ghost Adventures is the San Haven Sanatorium in North Dakota. It was opened in 1912 for tuberculosis patients. Like other facilities, it was a losing battle and became the last stop for hundreds of patients. Plenty of men, women and children all lost their lives. However, does that loss make it haunted? According to Zak, the location is "infested with ghosts."

Claims of the paranormal include a woman being scratched, the usual, unproven claims of Satanic rituals, the sighting of the devil in car headlights, and that evil creeps up from the basement. Sadly, there was a more recent death, that of an investigator who fell down the elevator shaft. Instead of taking it as an accident, Zak puts out the idea he was pushed by unseen forces.

As Zak interviews and asks leading questions to Julie about the scratches she got, she and her husband claim something possessed her after the event as she wasn’t the same person In fact, she hasn’t stepped foot on the ground until Zak shows up and then she has no problem going in.

While looking around one of the buildings, Zak makes the usual comment of feeling anxiety and heaviness. Once outside the building, Zak is handed a small hatchet, which he immediately claims was used in Satanic rituals. He says it’s a demonic battery and throws it into the abandoned building. Of course, there is nothing to suggest that axe was used for anything nefarious.

To get the investigation started, Zak sends Jay down into the tunnels under the buildings. This looks to be the body chute where patients were carted away. Aaron goes to the basement, which is riddled with debris. Everyone admits the place is crumbling and falling apart and might just collapse at any minute.

When it’s time for the main investigation, Zak boldly states they have one goal for this investigation – to find the evil in the building and pick a fight with it. Bold words that will come back to bite him right in the ass.

The building is filled with the usual bangs, pops, cracks and sounds of falling debris. Despite saying the building is crumbling, they keep claiming something is being thrown at them.

On the upper floors, Zak and Aaron hear footsteps coming up the stairs. It sounds like evil is coming right toward them. So what does Zak do? He runs the other way and calls to Aaron for help. This happens again when Zak sets up a static camera. While doing so, he sees something, drops the camera and runs. For someone who called for a showdown with evil, Zak certainly isn’t standing his ground.

While roaming through the building, Zak demonstrates how the teen met with his accident. The elevator isn’t sealed off in any way and there are no barriers on the upper floors. Zak almost walks off the building. Clearly this isn’t the work of evil, it’s not seeing where you’re going.

As the investigation continues, both Aaron and Billy say they feel heaviness on their chests. Aaron nearly has a panic attack as they end up back by the tunnels. And once again, even though the building is crumbling and littered with debris, Aaron says a piece of wood is thrown at him. This is the last straw and Aaron runs around in a fit.

That brings the investigation to close, but there is one more event. As Aaron and Zak start to walk away, there is a loud bang and crash. This is most likely a piece of the building falling, or perhaps someone throwing something at it. However, what do we get from Zak who wanted to taunt evil? He runs way. Again.

Now let’s look at the statement Zak made at the beginning. The building is "infested" with ghost, so they should have dozens of pieces of evidence, right? There were no scratches or attacks. Nothing shoved them down the stairs. A Satanic figure didn’t present itself. They hear pieces of the building creaking and crumbling. And they heard what sounded like a bottle shifting, most likely from an animals nosing through the trash.

Further, what is supposed to account for all this evil? What event or person sparked this? Did the hundreds of cases of tuberculosis make it evil? Is it the Indian connection Zak is desperately trying to draw? The Satanic rituals there is no evidence of? The children’s cemetery that seems to be a couple miles down the road?

For a seeming den of evil, this building didn’t produce much.