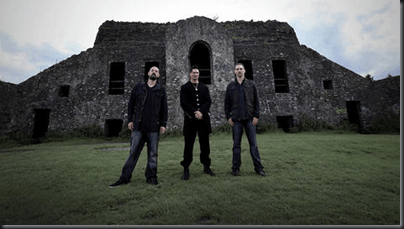 Despite the debacle of their Halloween episode from a few years back, Zak, Nick and Aaron are out to do another Halloween special, this time in Ireland and not as a live presentation. They have several locations on the agenda including Leap Castle, the Hell-Fire Club, Loftus Hall and the Steward’s House with the Killakee Cat.

Ireland has a lot of lore and superstition. It also has a lot of additional religious beliefs. To start their tour of the countryside they head to a cave believed to be the birthplace of Halloween itself. This is where the spirits would make their way to earth to walk amongst the living. While they have a tour guide and priestess, neither seems to do a whole lot, except give them a blessing. The guys don’t go very far into the muddy cavern, perhaps because it’s too narrow, but we get tales of the mysterious energy in there and Zak drifts off into one of the trances we’ve seen so many times before. It’s a quick trip and they’re off again.

The next stop is Leap Castle which has it’s tales and legends. It was built in 1250 by the O’Carroll clan and was the site of many family despites that ended in bloodshed. One of the most notable gave name to the Bloody Chapel. One of the family members was a priest giving mass in the chapel. His power hungry brother broke in and ran him through with a sword. It’s been told there is a pit where bodies were thrown and left to rot.

This is also a location of the Hell-Fire Club, a group rumored to engage in Satanic rituals and human sacrifice. Their tour guide tells them he has evidence of these rituals still going on including a white circle on the ground and some charred pieces of a book. This where Zak and Aaron will investigate while Billy and Nick will investigate Leap Castle.

The location for the Hell-Fire Club all seems pretty normal, until Aaron feels a negative energy in the place. He begins to warn Zak that danger is upon them and even tries to stop him from going into one of the rooms. In typical fashion, Zak bullies him and shoves his way in. A few minutes later, Aaron is running out of the building like a scalded cat! He believes the hand of Satan grabbed him by the ear. He’s pretty traumatized by the whole incident, quite literally to the point of tears. Despite what Zak says, he once again acts like an asshole and treats Aaron like shit. This from the same guy that has damn near soiled himself a couple of times in recent past.

While Zak and Aaron are cleaning out their drawers, Nick and Billy are doing their own investigation. Even though Sean the owner seem confused as to why they’re visiting, they wander around his castle and begin to talk about their feelings of dread. Billy speaks of pains in his stomach as though someone has punched him and then reached in to twist his intestines around. Certainly couldn’t be any of the food their not used to.

While Billy deals with his pains, Nick gets bold and brave and jumps into the bit where bodies have supposedly been dumped. As expected, he begins to feel overcome and has to focus to keep his wits about him. He further adds that he hears voices and feels a strange energy. There are also more examples of "orbs" flying around the room causing a ruckus.

After Zak and Aaron had their encounter with the ear-pulling devil, they head back down the mountain, but Aaron says they need to stop the 4×4 cart. It’s time for him to have another emotional moment over what just happened. Instead of getting as far away from the place as possible, it’s better to pull over and share some deep feelings. Ah, but wait, there was a reason they chose this exact spot to stop. As Aaron says this is what they do, this is their way of life, a ghostly voice in the night cries out "Nooo".

With that part of the investigation done, they head down to the Steward’s House. Jay has been monitoring the house and hears all sorts of noises and bangs going on. This is the house of the Killakee Cat. It is said not to look into the eyes of the cat painting nor turn the painting upside down as this unleashes a demonic fury. Well, Jay turned the picture upside down. Did he call down the thunder?

Zak heads into the house alone, because it’s more dramatic that way, and begins to use the Spirit Box. As he stands in front of the cat painting he gets a meow out of the box. And when he asks who or what touched Aaron, he gets Satan. Nobody saw that coming did they?

They next head off to Loftus Hall, perhaps the most haunted house in Ireland. It is believed the devil spent the night in the house wherein he seduced a young girl, who then gave birth to the devil’s son. A son that was later killed and buried in the walls of the Tapestry Room. Amazing how many stories end with a body stuffed in the walls.

Despite this story, it was a convent for nearly 70 years. During that time 4 nuns lost their lives. Zak links this all to suspicious circumstances. Not to be rude in any way, but 4 lives in 70 years is incredibly small from a statistical standpoint. Show me a house with people living in it continually for 70 years that hasn’t had accidents? But the house also has religions statues without their heads, so clearly the work of the devil. Certainly not the work of vandals or miscreant youths.

But this is the house with all the excitement. To get the ball rolling they switch over to night vision mode, but there is a small glitch. The lights go out, yet the audio keeps working. This allows us to hear Zak start yelling for no reason. He then mumbles, "get him off the property." It’s then time for Zak to drift off into one of his trances. Nick and Aaron are so concerned about his safety they leave him alone in the room and head back to watch him on the monitors.

They report there is strange banging coming from the tapestry room and Zak arrives in time to record bangs and film balls of light or as I like to call them, bugs. They confirm more orbs on the stairs where a nun fell and passed away. Zak heads to the upper floors where the owner doesn’t let many people go because he feels it’s the most haunted and dangerous. This is where the orbs have lead him, so this is where he has to go.

Zak immediately feels there is someone up there and as he records himself discussing the topic, a door in the background closes slightly. The next minute of conversation is bleeped out because Zak is swearing his head off. He barely raises an eyebrow at Aaron being touched by the devil, but a door moves and he loses his damn mind. Again.

They reconvene downstairs where it’s said the devil came over to play cards. With Kinect camera in hand, they ask if the devil would like to play a hand. To tempt the devil, Aaron has 3 playing cards of the number 6 in his hand even though one of them appears to be missing or blanked out. When Nick smacks the table and says for the devil to join them, a stick figure appears on the camera. It doesn’t take a seat at the table, but rather stands on Aaron’s head. Zak then asks for it to wave it’s arms around and spread it’s legs. Why is he asking the figure to spread it’s legs? What’s he got in mind?

The stick figure then drains all the energy out of Aaron and soon he’s outside throwing up. It appears he’s been touched by the devil twice on this trip. But he survived and lived to tell the tale. Not many can say they danced with the devil on Halloween night. That’s a story to tell the ladies isn’t it?

Quite a trip around Ireland and some strange events. We’ll just skip over most of it and jump to the Kinect camera. Now that was a little unusual. Who knows what it was picking up or if it was just glitching out. Who knows what hackery has been done to that device. I seriously doubt Aaron was actually touched by the devil though. As with all of these episodes so much can be said and so much can be refuted. But they got to hang out in Ireland and play around in castles on Halloween. Got to give them credit for that. 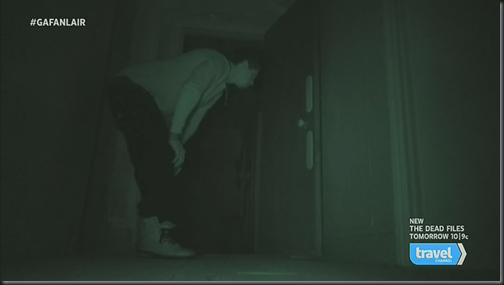 Now raise your hand if you wanted this door to slam shut and bust Zak right in the head?? Now that would have made me believe the devil was in the house.