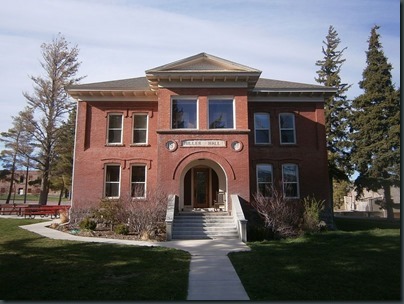 Halloween may be past, but the Ghost Adventures team are off to Albion, in Southern Idaho, to visit the Albion Normal School, now a Halloween attraction with Satanic overtones. At least according to Zak.

The school opened in 1863 and educated children for 60 years before going through multiples owners until it become abandoned.  Once closed, the property went through several hands before being abandoned. That’s when, according to Zak, the Satanists moved in.

In the 80s, during the "Satanic Panic" where zealots and the uneducated saw Satanic symbols, rituals and themes everywhere, the building was "rumored" to have been the site of rituals.

That aside, they meet with Heather, who explains that an employee sitting at a table suddenly had a grotesque seizure. Heather corrects herself saying it was a seizure or possession. When the same man comes back two years later and has another seizure-demonic influence.

As they start the investigation, they find a very crude pentagram on the wall. It’s amazing how Zak can be so influenced by man made symbols spray painted by mindless vandals. Zak puts his spirit box over it and gets the words, "watch out". When he asks what they need to watch out for, they get a reply of "you’ll be killed". Spooky stuff indeed, almost like he planned it.

Aaron puts his hand on the symbol, because Zak has stated it’s now a portal. Surprise, Aaron has burning in his hands and one is supposedly hotter than the other. The same reaction can be done by slapping your hand.

They next bring in Dallon, who confirms he has had the same feelings. To show his bravado, he touches the symbol and on cue, Jay is outside clutching what looks like a spider bite behind his ear. To show solidarity, Dallon says his ears is causing pain.

For Day 2, they meet with Heather to explain how Jay and Dallon have been marked. Jay has scratches to form X and I, while Dallon has two vertical scratches. Zak makes the revelation they comprise 5 lines and when taken apart and twisted, they can form an upside down pentagram! That is an astonishing leap.

Like so many other investigations, Zak says he feels ill and not himself. As he is lying down, Aaron breaks in and says he heard the gymnasium door slam and a voice call his name. He goes to investigate to find a slew of haunted decorations.

Zak then heads to Comish Hall where he and Billy hear footsteps. Zak refers to this as "a goatman walking around on it’s hooves." This is followed by Billy hearing knocks and thinks something is on the other side of the wall. There probably is, a raccoon.

Fixating on the pentagram, Zak sees there is a "crypt" under the fireplace, where ritualistic remains are buried. Two blips on the device are all he’s needs for confirmation.

Next, it’s the Spirit Sweep device, which looks like an iPad hooked up to a speaker. It could be programmed to make all sorts of noises from the great beyond. But, it’s silent until Zak places it in front of the pentagram, then he gets the sounds of "a male voice performing a ritual or sacrifice".

In the final minutes, they split up, each taking a building. This gives us three stand out moments. One is when Aaron gets molested by one of the utterly creepy Halloween props. The second is the ridiculously cliche act of Zak brandishing a crucifix like some sort of avenger. And finally, when there is a loud bang and instead of standing his ground against evil, which he isn’t afraid of, Zak soils his pants, and runs at a full sprint in the other direction.

Before buying into the Satanic hype, let’s review the evidence.

They get the words, "you’ll be killed" when a device is strategically placed over a poorly drawn pentagram.
Jay and Dallon have scratches that Zak says make a pentagram. Or they could make a tic-tac-toe board.
They hear footsteps and a loud bang in a building loaded with debris.
They find a hole under a fireplace.

And all of this at a haunted Halloween attraction. Clearly there’s no financial gain to this investigation…