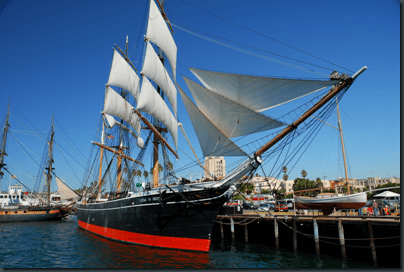 It’s time for a nautical investigation aboard the Star of India, a ship that has been in service or at least on the water since 1863. The ship is named after it’s first port of call, India, and has sailed around the world more than a dozen times. (Actually, the ship was named, Euterpe and later renamed to Star of India). During those adventures there have been some causalities most notably military McBarnett who slit his own throat while on board, John Campbell, a boy who stowed away, but while working to pay for his passage, plummeted to his death and a crew member who got caught up in the anchor chains.

Those who work on the ship claim to see shadow figures, feel the presence of someone watching over them, footsteps and the sound of voices. They also feel the cold hand of John Campbell. A different John claims he saw a man in a top hat and was pushed by someone unseen. Others say they feel someone touch them on the back as though playing a game of tag. They believe this to be the young boy John Campbell. There are also rumors involving previous members of the crew who may have been indecent with some of the passengers, although we don’t get a lot of detail about that.

In a somewhat hush-hush aside interview, Zak is encouraged to use low tech styles of investigation. The speaker, who doesn’t want to identify himself, says others have had better luck that way. Why is this guy so covert about giving Zak details? Nevertheless, Zak takes him up on the advice. This may have just been a way to segue to haggle over a compass.

The investigation starts with Zak in McBarnett’s cabin, or rather the first mates cabin where he committed suicide. In short order Zak feels disoriented as though the ship is rocking on the high seas. In conjunction with this we have the sound of what Zak feels is a doorknob turning and possibly the sound of girl calling out. He believes he picks up a voice saying, "no… I just gave up."

Taking the advice to keep their investigation tools simple, they piece together an electroscope. As Zak, Billy and Aaron gather round, they feel a cold chill and once again have the sensation that the boat is rocking. They have been getting responses from what they feel is John Campbell. However, when they take out the Ovilus, they don’t get childlike responses. Instead, they pick up the words Akasha and Devil. This isn’t what Billy expected. It’s also during this part that the strips of aluminum in the electroscope drift apart even though only for a split second.

When they travel back to the first mates cabin they bring out the SLS camera and pick up a small stick figure in front of Zak. But again, the Ovilus offers up words that wouldn’t come from a child. They get, slave, contrition, grace and funeral. They believe the military captain is asking for help and while doing a quick spot of research over contrition, Jay finds a prayer called the Act of Contrition. He decides to offer up this prayer and upon their departure from the ship, the camera captures what they feel is a light orb moving at the height suggestive of the captain. The team takes this as a positive sign that perhaps they have given the captain some closure or release.

It’s interesting that Zak mentions McBarnett as that name is not associated with the Star of India. You can find repeated story after repeated story about a man getting injured in the anchor chain (although he is never given a name) as well as mentions of John Campbell. The articles I saw mention the actual ships captain, John Storry who died on board and was buried at sea. It surprises me this other suicide isn’t mentioned with all the other legends.

Funny thing, as you look up information about this ship, it’s the same three stories with exceptionally vague details. You would think that a boy crushing himself to death from a massive fall, a crewman getting mangled to death in the anchor chains and a military captain slitting his throat, getting saved by the ships doctor, then tearing out the stitches because he really wanted to die would be a little better documented. You would think the captain would write some pretty exacting details considering those in charge might want some answers.