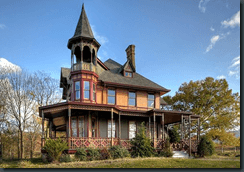 From their previous episode, Nick and Katrina visit another house in New York, the Kreischer Mansion, built around 1885. There have been a couple of tragic events, such as the shooting death of Edward Kreischer as well as mafia related murder where a man was strangled, stabbed, drowned and then incinerated in the furnace. There are actually news stories related to the mafia hit, so details of that story might be true. That happened in 2006 so these two events are decades and decades apart.

However, people claim the house has a darker past than that. As was the common practice of the time, seances were held in the house in an attempt to contact the departed spirit of Edward. Some believe this portal to the other side is still open, letting in evil spirits.

Some of the activity experienced includes a stabbing sensation, the figure of a dark woman and the feeling of being touched. It is said, the figure of the women seems to be handing out a warning, but about what remains unknown.

As they start the investigation, Nick and Katrina feel cold spots and a static charge like electricity. Katrina says she feels a pain in her back and feels something touch her elbow. Nick feels he smells sulphur coming from the house and gets the words, "I’m Edward Kreischer", "Hi Katrina", "I’m dead" and "murder" from the Geobox. As the culmination of all this, Nick gets a stabbing pain in the leg. They’ve also had a couple batteries die which they feel are feeding this entity.

The next day, they start off in the basement by taking some pictures and show just how easy it is to cast a mysterious shadow on the wall. They supposedly hear the cots being moved as well as more batteries mysteriously drain. While in one of the rooms, Katrina says something was thrown and she hears loud knocks.

For the final day, Nick and Katrina will conduct their own seance with the help of Colleen Costello. During the event, Nick grows ice cold and feels a pain along his back. On their devices, they feel they get the words, "I’m sorry" and "I’m coming downstairs".

Their goal is to close they portal they feel has been letting spirits in. And it seems all you have to do is ask the spirits to go the light and they will leave. No gusts of wind, no resisting voices, no candles getting blown out. Just tell the spirits to follow the light and everything will be fine.

While the house looks impressive and if restored, would be amazing, I fail to see how this place is haunted. I have no confidence in that Geobox as Nick is the only one that hears anything from it. An old house, that’s been abandoned for a few years has loud and odd knocks in it? Well, who knew that sort of thing would happen? The dreams that Katrina has about figures giving her a warning – come on, what else are you going to dream about after hearing all those stories?

To be honest, the history and legacy of this house doesn’t exactly fit with the "rampant paranormal activity" claims. We have two grim events to be sure, but this house doesn’t seem all that active really. Yes, they both make comments about aches and pains, but those sorts of personal experiences are subjective. Everyone has had phantom pains and the like. That’s not evidence that defies all normal explanation.

But there it is, the final episode of the very short first season of Paranormal Lockdown. They picked a few interesting places to visit and while I don’t think it helped their credibility to have Grant Wilson show up on the scene, it’s good to see Nick and Kristina back on the paranormal circuit.