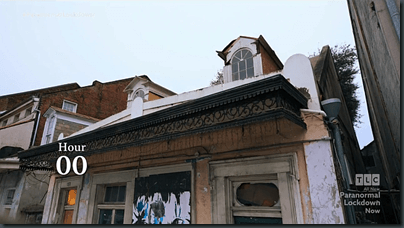 Nick and Katrina head to New Orleans to investigate the murder/suicide surrounding the small house on Rampart Street. When you read stories related to hurricane Katrina, this one will inevitably come up. It involves the relationship between Zack and Addie who came together during hurricane Katrina. After they survive the storm and chaos, things go terribly wrong with Zack killing Addie and then taking his own life. Rumors abound over what drove Zack to kill and the natural suspects are voodoo and demonic possession.

The apartment used to be on the top floor with the voodoo shop on the lower floor. Now, it’s basically a shell of a building. However, to Katrina’s mind, the old appliances and fixtures from the apartment still remain. It’s very unlikely those are the same appliances from a decade ago, nobody would be that morbid.

On the first night, Nick feels pebbles are being thrown at them. It seems Nick is partially right. Things are falling from the ceiling since it’s nothing but framing and we can clearly see the stones, but they aren’t being thrown, they’re just falling.

For day two, they bring out the Wonderbox and get the words, "you’re not alone" and "strangled to death". Katrina feels very out of sorts, but she is very much caught up in the events that took place there.

For the final day, they set up motion sensors which go off a couple of times. Also notice that the Geobox is running, calling out words in the background. And those words all have a ghostly echo and reverb added to them. It seems like that has been added for dramatic effect.

Editing through the words, they get "Please don’t hurt her" and "I hate myself", which they of course attribute to Zack and Addie.

For final portion, they bring in Bloody Mary, the voodoo priestess (classy stage name) and Leo the landlord. Leo doesn’t seem too concerned about the space and the events that took place. Mary sets up a cleansing ritual to help with the healing.

There is an air of mystery about New Orleans and the same can be said for this small apartment. Unfortunately, this investigation doesn’t shed any light on matters. It has an interesting connection to voodoo, but then again, so does everything in New Orleans. In the end, the evidence brings very little to light. They get a couple of hits on the audio devices, but there is really no other evidence to go on.