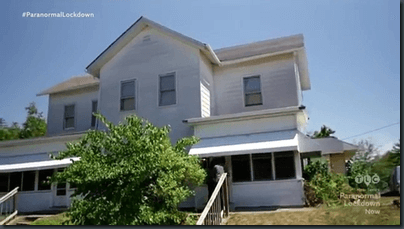 It’s time for a new season of Paranormal Lockdown with Nick and Katrina who visit the Monroe house in Hartford City, Indiana. The current owner, Eddie Norris, bought the house in 2006 to fix up and sell. But that idea hasn’t come to fruition as workmen have walked out and the house is rumored to have occult activity. Neighbors claim to see figures moving around and dark figures at the windows. However, the house itself does not have a history of tragedy.

As Katrina walks in, she feels complete oppression. As Eddie gives them a tour, Nick feels like he’s chocking and can’t get his breath. Eddie confirms the rumors of rituals in the house. Based on that, he had some people cleanse the house, but says it backfired. Eddie then shows one of the items they found under the house, a piece of jewelry wrapped in hair wrapped in a cloth. These are accompanied by some bones.

Nick asks Michelle Belanger for an assessment. She feels they might be part of a hex. When she puts the necklace on, she feels that it was used to bind someone, to stop them from talking.

For the first night, Nick and Katrina head to the basement where Katrina hears a gasp that unsettles her. There are also several knocks and bangs. Katrina says the house or space is angry, while Nick says the house is draining their energy.

For the second night, they bring out the Geobox. It runs into interference which Katrina believes is someone trying to stop the communication. At this same time, Nick feels he hears the words, "Satan was here" come through. This is followed by puddles of water on the floor that lead to the kitchen and more loud bangs. To Nick, this is classic poltergeist activity and brings more events such as the cabinets in the kitchen standing open and Nick sees a shadow figure standing behind Katrina.

Nick then brings out a new device called the portal, which looks like a speaker covered in Christmas lights. They very quickly get a whole series of phrases such as, the basement, need help, dig, shut up and finally, get out. With all of this going on, the floor begins to shake. As they dash outside, a security guard for the neighborhood confirms he felt the ground shaking as well.

For the final night, Nick heads down to the basement and Katrina tries her luck with wearing the necklace they found. She sort of wears the necklace as she feels it might bring something negative to her.

Nick has a heck of a time in the basement as he feels something clawing at his back and grabbing at his feet. He also sees something moving in the darkness before he gets grabbed.

They meet back up with Eddie and confess they don’t know what the haunting is or what’s causing it. Nick is clearly rattled and Katrina feels there is something negative, perhaps sinister about the place.

Four days later, they get a call from Eddie, and they both return to the house. They head down to the basement where Eddie says he was digging when the lights went out and he heard walking upstairs. But the big discovery are some bones buried in the dirt. Further, they appear to be human and they may have unearthed part of a skull.

We are left with a note that the bones are part of a police investigation.

This episode is interesting in that if you take a step back, the plot is very similar to an episode of the Simpson’s Treehouse of Terror.

As stated, there is nothing to suggest tragic events. The rituals are just rumor and always seem to come out when there is an old house around. About the only thing Nick and Katrina find is some water on the kitchen floor. Nothing they encountered in their sleep deprived state jumps to the end of the paranormal scale.

We have some cabinets swinging open, but there is clearly some sort of tremor or vibration, whether that be car, train or seismic, so that seems a pretty plausible explanation.

The puddles? Have a look at the ceiling and you’ll notice multiple tiles stained with brown. The ceiling leaks, ergo, water on the floor.

The necklace in the hair is unusual, but don’t go too far out on a limb. It’s not usual for people to give lock of hair as a keepsake. Further, it could have been kept with the necklace from a loved one. Going with the "that bitch won’t tell" comment from Michelle seems hasty.

Now, we have some bones in the basement, bones that might be human. We’ve seen tons of shows where human bones very quickly turn out to be animal. But if they are human, burying them mere inches under the soil, in perhaps the most inconvenient place, was a pretty terrible idea. Those could have “easily” been buried severl feet down considering the size of that dirt pile.

It’s not a surprise that Nick and Katrina feel drained after staying up all night and sleeping in crap conditions.

If we take the actual evidence they capture, it’s radio voices from a box that lights up, bangs, and puddles of water. I’m not entirely sure that makes this a cauldron of evil.